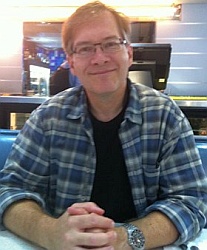 Since the start of StratoCat in 2005 I've planned to write an article about Genetrix's fascinating story, but always ended making merely a rehash of the existing works elsewhere, something that did not convince me much. In the process of searching more information on the subject I've found "UFX" a fantastic website created by Joel Carpenter which documented very well the impact of the 50's and 60's technology on the UFO myth and the culture. UFX offered a glimpse to a fringe world ranging from weird projects that never left the drawing boards to strange machines that would populated the vasts battlefields of a future third world war. Of course, including reconnaissance balloons.

I've contacted him, and we started to exchange a lot of mails on the topic, developing some kind of friendship in the distance fueled by our mutual interest. He even got me a copy of the Peebles book that was unfortunately lost somewhere by the Argentinian post office and never arrived home. Still, when I needed some data or information he took the job to scan countless pages of the book. Other times, we shared some weird finding or theory.

It was a shock for me to learn of his sudden death in March 2014.

I want to imagine that if he had the chance to read these pages, although he would not have discovered anything he did not already know, he would have enjoyed them.

Go this memory to Joel, a friend in the distance...