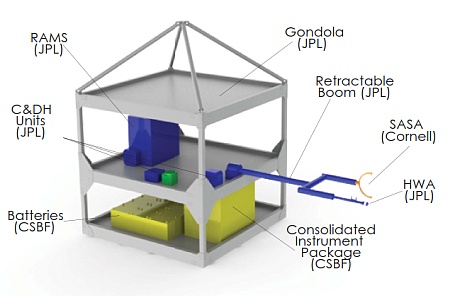 ASTRA (Analog Site Testbed for Readiness Advancement) was an experiment aimed to test three surface instruments systems that could be in the future included in a mission to mars. The test was carried out in a NASA balloon flight over New Mexico to demonstrate their capabilities in a Mars-surface-like environment and to identify the critical path-to-flight steps for future advancement.

For the mission, the Jet Propulsion Laboratory (JPL) provided a gondola similar to the one used for balloon-borne in-situ and remote measurements for their atmospheric research program. At left we can see an scheme of the distribution of the instruments on it (click to enlarge).

The three instruments installed onboard the platform were:

The focal plane RAMS (Rapid Acquisition Mass Spectrometer) developed at JPL, which combined the advantages of
high sensitivity (down to 1 part per million or ppm), and a large linear dynamic range, with extremely rapid acquisition of mass spectra from 7-150 amu with isotopic (0.25 amu) resolution. RAMS could see rapid fluctuations in atmospheric constituents (necessary for the study of, for instance, vapor fluxes to and from the Mars surface) and also would have potential applications for laser ablation mass spectroscopy.

HWA (Hot-Wire Anemometer) also developed at JPL was the latest generation of hot-wire anemometer, with heritage from the Mars Pathfinder MET instrument, and the ATMIS sensors developed for the Mars Polar Lander and the NetLander project. In addition to wind speed, a thermocouple cage around the hot filament detected heat plume direction, thus permitting 2-D wind vectors to be established.

SASA (Single-Axis Sonic Anemometer) developed at Cornell University was a proof-of-capability device for an eventual three-axis sonic anemometer design. It used novel ultrasonic transducers capable of acoustic coupling to the thin Mars atmosphere. Rapid resolution of wind vectors (in the order of 20 Hz), eventual 3-D capability, an open sensing volume, and high sensitivity, accuracy, and precision (in the order of 2 cm/s) made this technique attractive for the measurement of turbulent eddies in the planetary boundary layer.

The two anemometers were installed at the end of a retractable boom also developed by JPL engineers. 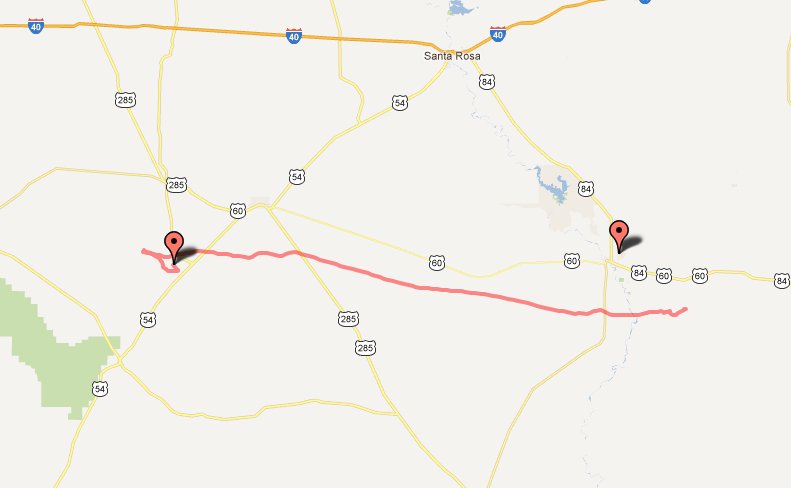 The balloon was launched as mission 633N using the dynamic method at 13:40 utc on September 9 2012. After a nominal ascent phase it reached the desired float altitude of 107.000 ft, and started a slow flight towards the west.

The flight was terminated at 17:32 utc that same day when the balloon was separated from the payload, which descended in parachute in the Duran Mesa, 14 miles SW of Vaughn, New Mexico. Total flight time was 4 hours and 30 minutes.