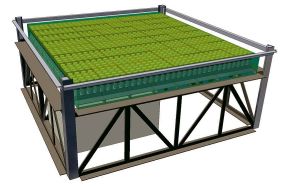 Above left we can see a basic scheme of the instrument. The main active detector of the CREST instrument was made of Barium Fluoride (BaF2) which was choosen based on its relatively high density and light yield, particularly in its fast scintillation component, which provided single photoelectron timings of well under 1 nano second. A total of 1024 crystals, 2 cm thick with a diameter of 5cm were deployed in a square pattern, with a 7.5 cm pitch in both orthogonal directions, covering a total area of roughly 2.3 x 2.3 m2. The body of the array was divided into 8 mechanical subunits, facilitating shipping and recovery.

The primary objective of this flight (CREST-2) was to test the behaviour of the full scale instrument during a mission which resembled the flight conditions to be encountered during the long duration balloon in Antarctica.

The balloon was launched using the dynamic method assited by launch vehicle at 13:59 utc on May 5th, 2009. After an initial ascent phase with drift to the east the float altitude was achieved when the balloon was over Portales and there inverted again his course back to the west. After a while a valving command was sent to the balloon to let it down to pressure altitudes simulating an Antarctic flight, where the science group collected data and verified operation of the instrument sensors.

The flight was terminated on May 5 at 22:51 UTC and landed 32 Nautic Miles NE of Roswell, New Mexico after 9 hours and 32 minutes of flight. The termination, descent and parachute separation on the ground were normal. The flight crew reported that the payload was in good condition on the landing site.