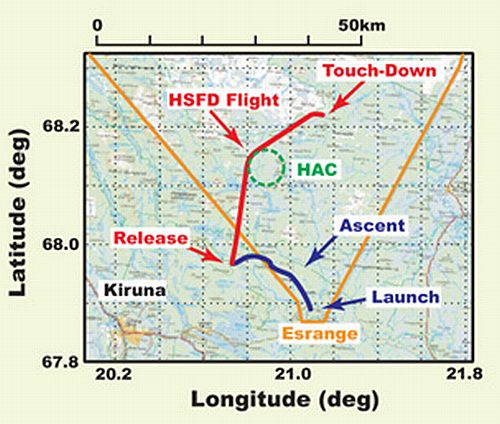 The launch of the balloon was performed on July 1st, 2003 at 06:03 local time. The operations involved a complex launch procedure, assisted by auxiliary balloons, which are later jettisoned, so that the vehicle is not exposed to any impacts and cannot be dragged along the ground.

After an initial ascent phase the balloon reached float altitude, but moved slightly outside of the so called "Zone B" assigned originally to perform safelly the drop test. Nevertheless, with the approval of the Esrange safety officer, the flight was allowed to continue as planned and the plane model was released from 21km at 07:14 local time.

When the demonstrator reached the landing site, the mission control commanded the recovery system to activate, but it did not work as expected and the demonstrator was damaged on touchdown. As a result, the flight experiment campaign was interrupted.

After a complex but nominal launch phase the HSFD was released from the balloon achieving 39 seconds after release, the target Mach 0.8. Constant Mach number data acquisition was initiated and continued for more than 40 seconds. Then the demonstrator decelerated to Mach 0.75 and the return phase was started.

The demonstrator selected the #5 landing site as the best site within it's range capability, and was guided to the selected site by flying along the surface of a Heading Alignment Cylinder (HAC).

As a result, the flight experiment campaign was interrupted.

Although the flight experiment was interrupted due to the demonstrator being damaged, valuable data were obtained. The demonstrator's aerodynamic characteristics at Mach 0.8 were estimated by analyzing the flight data, and these are now being utilized to improve the model. The secondary mission objective, verification of the guidance & control system for the transonic speed region, was also achieved for speeds up to Mach 0.8.

Time after this test was done the Japanese Space Agency made a cut in the funding of the project, leading to a virtuakl cancellation of it.