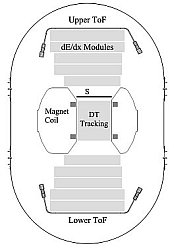 The balloon was launched by dynamic method with assistance of launch vehicle (Big Bill) in the morning of 21 May. 2000. Weather conditions for the launch were good and launch operations were nominal. The balloon was released from the spool and rose overhead in a normal fashion.

The balloon developed a hole immediately after the launch collar was released. The payload was launched and the balloon system began ingesting air. It ascended to approximately 33.000 ft. where it began to show an anomalous ascent profile. The flight was eventually terminated at 44.000 ft.

An investigation was started. The comitee found no specific anomalies with the balloon or launch process and concluded that the most likely cause of balloon failure was the inability of the balloon to adjust to, absorb and/or tolerate the stresses present during the dynamic launch process.

The balloon was carrying the maximum allowable payload of 3629 kg. and had been inflated to a gross inflation of 6591 kg. The committee found a correlation between payload weight and failure rate which indicated that the success rate of balloon flights diminishes with the increase in Launch Stress Indices and gross inflations.

After this flight they recommended that heavy payloads continue to be flown with the realization that flights with heavy payloads, high Launch Stress Indices and high gross inflations carry a higher probability for failure.

No data was obtained from the flight due to the balloon failure.

After the mission was aborted the flight was terminated and the payload landed close to the launch base essentially undamaged. The field crew then removed the instrument from the shell and performed an improvised hydrostatic test to ensure that the gondola, which had taken some dents landing, was still sound. Simultaneously, another team exhaustively checked, refurbished, and tested the instrument, which was determined to be in perfect working order.

Within 72 hours the instrument was back in the gondola, working perfectly, and again ready to be launched.

It was succesfully reflown two weeks later from the same place.