Balloon launched on 11/16/1959, from Holloman Air Force Base, Alamogordo, New Mexico, US 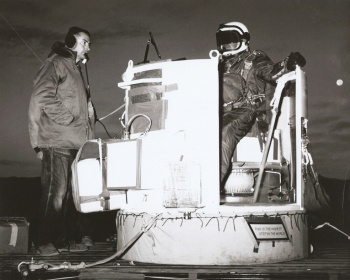 The first flight was done on 16 November 1959, from a point north of Truth or Consequences, New Mexico. Attached to Kittinger were electrodes for monitoring his heart beat and his respiration. A radio for communications and in-flight recording of data was contained in the seat instrument pack. He wore a Beaupre backpack parachute and an automatic chestpack reserve parachute. Kittinger was seated on a styrofoam seat which had holes containing water bottles cut in the foam. The styrofoam furnished insulation and the water provided heat.

External support for this mission, called Excelsior I, was provided by a B-57 aircraft that would take photographs during the ascent. Also a C-123 was airborne for support at medium altitudes, and a helicopter gave low altitude support. Numerous cameras were used for this mission, placed in the aircrafts, the balloon, and on Captain Kittinger itself.

Upon reaching the predetermined jump altitude, Kittinger found he had difficulty getting up from his seat. When the water bottles froze, they expanded and were holding the instrumentation kit attached to him to the seat. In the process of trying to stand up, which took 11 seconds, he accidently activated the timer for the stabilization parachute. This early activation of the timer caused the pilot parachute to deploy before his falling body had gained enough speed to properly deploy the system. It was supposed to deploy 16 seconds after Kittinger left the gondola, but actually deployed at two and one-half seconds after he jumped and the main parachute wrapped around Kittinger's neck and he could not get it unwrapped. He started to spin uncontrollably, until the centrifugal forces caused him to lose consciousness.

Nevertheless, the aneroid opened the reserve parachute at an elevation of 11,000 feet and the canopy was fully deployed at 10,000 feet, which was only 6,000 feet above the ground.