Balloon launched on 8/16/1960, from Holloman Air Force Base, Alamogordo, New Mexico, US 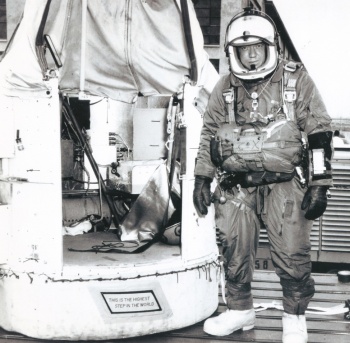 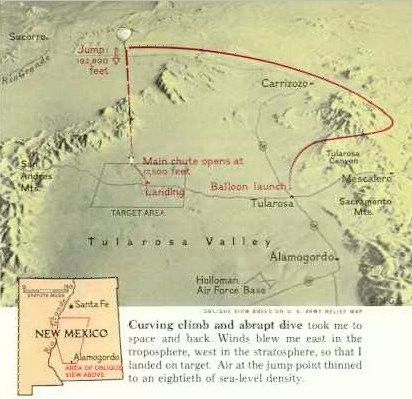 The balloon was launched from an abandoned airstrip near Tularosa, northeast of Holloman Air Force Base, New Mexico, at 5:29 am. The gondola rested in a flatbed truck acting as launch vehicle. The balloon was hold in vertical position launch by a crane. At launch time a first squib was fired to separate balloon from the crane and a second one to cut the truck straps. The balloon raised at 1200 feet / minute and initially heading to east. After reaching near float altitude the balloon started to travel west to the target area.

Captain Kittinger jumped from a height of 102,800 feet, at 7:12 am. With only the small stabilizing chute deployed, him fell for 4 minutes, 36 seconds. He experienced temperatures as low as minus 94 degrees Fahrenheit and a maximum speed of 714 miles per hour, exceeding the speed of sound. The 28-foot main parachute did not open until Kittinger reached the much thicker atmosphere at 17,500 feet. He finally safely landed in the New Mexico desert after a 13 minute 45 second descent.

This was the third and last jump of the program. At 5:29 on 16 August 1960 Kittinger lifted off from an old abandoned airstrip just north of Tularosa, New Mexico, and east of Highway 70. During the ascent, the pilot began experiencing severe pain in his right hand caused by a failure in his pressure glove. Apparently the glove failed due to a crack in the oxygen line. This would have been enough to abort the mission, but Kittinger did not initially report the problem because he did not want to terminate the test.

After several manouvers to reduce the ascent rate avoiding damage of the balloon, the craft reached an altitude of 102,800 feet, thus having 99.2 percent of the atmosphere beneath him. Only then -just prior to stepping out of the gondola- Kittinger reported the glove damage.

After a long inspiration and after saying "Lord, take care on me..." the pilot jumped. Once again, the Beaupre multistage parachute functioned perfectly. After falling for 13 seconds, his six-foot (1.8-meter) canopy parachute opened and stabilized his fall, preventing the flat spin that could have killed him. Only four minutes and 36 seconds more were needed to bring him down to about 17,500 feet (5,334 meters) where his regular 28-foot (8.5-meter) parachute opened, allowing him to float the rest of the way to Earth.

The achievements by Kittinger during Project Excelsior were:

(I) proof by survival that the Beaupre multistage parachute could provide stabilized free-fall descent from altitudes greater than 20 miles,

(II) proof that the MC-3 partial pressure suit and other items functioned under actual emergency open-air conditions, since previously they had been tested only in altitude chambers, and

(III) demonstration that a man exposed to the stress of space emergency conditions could, with minimum protection, endure and perform for more than an hour and override equipment failures.

After the flight he was awarded an Oak Leaf Cluster to the Distinguished Flying Cross.

The feat had impact in popular culture. In May 2006, the Scotish duo "Boards of Canada" made a musical video of their track "Dayvan Cowboy" (included in the EP "Trans Canada Highway") depicting in the first half of it the footage took by the Air Force on Kittinger's jump.

In 2011, Stephen Deazley and Martin Parker, inspired by the EXCELSIOR project created an original music and film piece called "Man High - Leaping from Space", based on the original documentary footage of the jump remixed by artist & media designer, Andy McGregor. The piece was premiered on Saturday 24th September, performed by Music at the Brewhouse, as part of Space Wide Open, UNESCO's Glasgow City of Music family event.

To see these videos online look at the external references for the links.

More recently, Kittinger is participating in the Red Bull Stratos effort, acting as Flight Operations And Safety, Capcom I. This civil program aims to break the record established by the Excelsior program back in 1960. 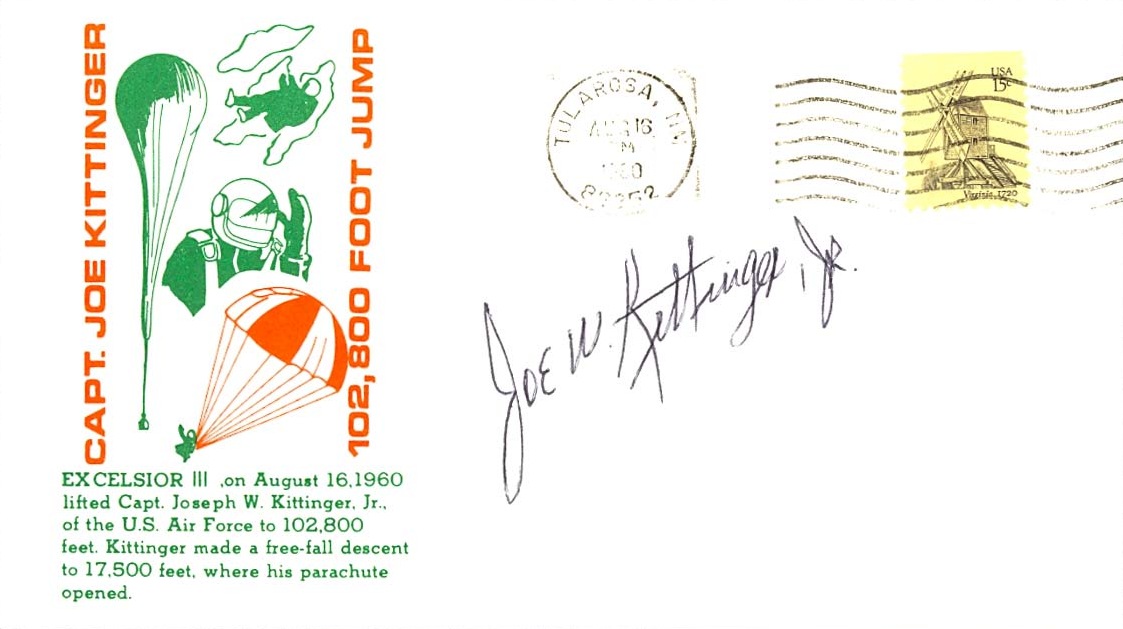