Balloon launched on 8/23/2022, from Timmins Stratospheric Balloon Base, Ontario, Canada 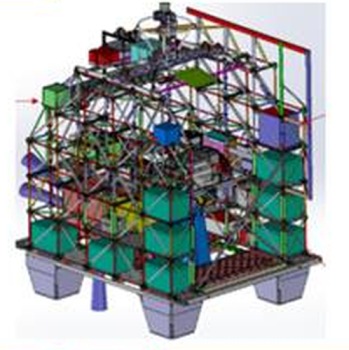 HEMERA was the fourth and last mission of the Strato-Sciences 2022 balloon launch campaign. HEMERA is a Research Infrastructure funded by the Horizon 2020 framework Programme of the European Union which integrates a large starting community in the field of tropospheric and stratospheric balloon-borne research, to make existing balloon facilities available to all scientific teams in the European Union, Canada and associated countries. The complementary of the HEMERA members capabilities in the field of balloon systems and operations will offer an easy and enhanced service to the scientific community. A wide range of scientific and technical themes are addressed, such as astronomy, atmospheric physics and chemistry, climate research, fundamental physics, biology, space research and technology.

The objective of this particular mission was to transport several experiments from German, French and Canadian institutes. For this purpose, was used a CNES developed gondola denominated CARMEN composed of a structure made of steel struts and balls with dimensions of 2.45 m x 1.85 m x 3 m. Total mass of the gondola is 210 kg being capable of transporting several payloads up to a mass of 700 kg. The gondola counts with a system por fine pointing if required.

The six experiments transported on board were:

GLORIA (Gimballed Limb Observer for Radiance Imaging of the Atmosphere) a joint development of the Helmholtz Large Research Facilities Karlsruhe Institute of Technology (KIT) and Research Centre Jülich (FZJ) from Germany. Build upon the heritage of both institutes in developing and operating IR limb sounders like CRISTA and MIPAS, GLORIA bridges the gap from scanning to imaging in the infrared spectral domain by combining a classical Fourier transform spectrometer (FTS) with a 2-D detector array tailored to the FTS needs. Imaging allows the spatial sampling to be improved by up to an order of magnitude when compared to state of the art limb scanning instruments. In addition to the limb mode the instrument can also perform Nadir measurements. GLORIA was designed to operate on various high altitude research platforms like the M-55 Geophysica and stratospheric balloons.

Total BRO an instrument developed at the Institut für Umweltphysik, Heidelberg (Germany) aimed to obtain precise measurements of the total distribution of Bromine in the stratosphere. For this purpose, it uses Differential Optical Absorption Spectrometry (DOAS) in the ultraviolet domain. The measurements are taken with optical grating spectrometers using either direct sunlight or scattered skylight, and different observation platforms such as aircraft (Falcon, HALO, Geophysica), unmanned air vehicles (UAV), or high altitude balloons.

FIRMOS-B (Far-Infrared Radiation Mobile Observation System - Balloon) developed by the Italian Space Agency (ASI) and the European Space Agency (ESA). Its a mobile Fourier
transform spectrometer prototype aimed to perform far-IR measurements of the atmospheric emission from ground-based sites and stratospheric balloons. The instrument is part of the preparation of the FORUM Earth Explorer mission, which will be launched by ESA in 2026.