Balloon launched on 8/22/2022, from Timmins Stratospheric Balloon Base, Ontario, Canada 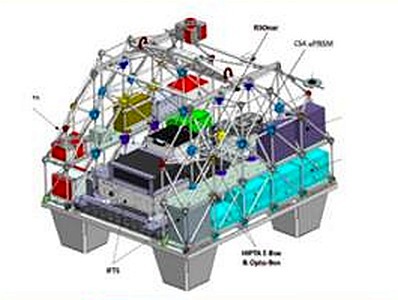 The IFTS mission was the third flight of the Strato Science 2022 campaign aimed to perform a series of experiments devoted to remote sensing and studies of atmospheric composition. At left we can see an scheme of distribution of the payloads in the platform (click to enlarge).

It used as platform CARMENCITA a multipayload stabilized gondola originally introduced in late 2012 by the Nacelles Pointees (Pointed Platforms) CNES team and was developed with several concepts in mind: modularity to allow the inclusion of several instruments devoted to the same or different research areas in one mission, reusability to overcome the difficult to adapt a platform specifically designed around an instrument to another, thus reducing costs and developing times and finally cargo volume which is maximized to allow the installation of many instruments.

Imaging Fourier Transform Spectrometer (IFTS) developed by the Canadian Space Agency under contract to ABB Canada and the University of Saskatoon, is a technology demonstrator of a high spectral resolution imager for atmospheric carbon dioxide and methane.

ALI V2 (Aerosol Limb Imager Version 3) an atmospheric monitoring tool developed by the University of Saskatchewan that measures the concentration of aerosols in the upper atmosphere using a unique optical device. The one flown in this mission wa an improved version of an instrument that was successfully deployed on stratospheric balloons in 2014, 2017 and 2021. The upgraded version of ALI can detect a wider range of optical wavelengths, measuring both orientations of the polarization state. The development of the instrument is supported by the CSA's FAST funding initiative.

HIPTA developed at the Defence Research and Development Canada center Valcartier is a technological project to demonstrate the effectiveness of a high-sensitivity Earth observation camera.

RSOnar developed by a team of York University is a technology demonstrator of a dual-purpose, commercial grade, CubeSat compatible star tracker concept for space-based space surveillance.