Balloon launched on 8/17/2022, from Timmins Stratospheric Balloon Base, Ontario, Canada 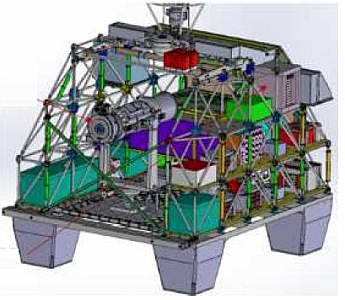 The SOLAR mission was the second flight of the Strato Science 2022 campaign aimed to perform a series of experiments devoted to the study of the Sun and cosmic radiation in a day time flight. At left we can see an scheme of distribution of the payloads in the platform (click to enlarge).

It used as platform CARMENCITA a multipayload stabilized gondola originally introduced in late 2012 by the Nacelles Pointees (Pointed Platforms) CNES team and was developed with several concepts in mind: modularity to allow the inclusion of several instruments devoted to the same or different research areas in one mission, reusability to overcome the difficult to adapt a platform specifically designed around an instrument to another, thus reducing costs and developing times and finally cargo volume which is maximized to allow the installation of many instruments.

CASOLBA, which stands for CAlibration de cellules SOLaires sur vol BAllon a module flown alone since 1975 in many CNES balloons. It is a highly sophisticated payload specializing in air mass zero (AM0) calibration of solar cells. Calibrations are performed at high altitudes (above 36 km) where the solar spectral irradiance is very close to AM0. The cells calibrated in this way can subsequently be used as standard solar cell in various laboratory tasks for solar cell characterization by sun simulators. CNES is the only laboratory in Europe carrying out calibration of this type above the atmosphere.

PIX-Solo a compact instrument developed at CNES aimed to record the energy deposited by ionizing particles in the atmosphere. It is composed by a MiniPIX detector developed by ADVACAM, equipped with the Timepix chip developed by CERN. The sensitive silicon surface is made up of 256 x 256 pixels allowing to trace the particles during their passage through the silicon. A convolutional neural network is then used to process the data, and associate each trace with a type of particle.

Experimental Characterization of Advanced Photovoltaics in the Stratosphere (ECAPS) developed at the University of Pisa, Italy aimed at the characterization of performance of a number of different solar cells in the stratospheric environment. The experiment includes a panel with up to 4 solar cells of different kinds (multi-junction GaAs, CIGS, perovskite, etc.), a dedicated I/V curve recording circuit, temperature and irradiance sensors, and an inertial measurement unit to monitor the instantaneous attitude of the gondola.

Coronal Magnetograph (CorMag) an experiment aimed to studying the magnetic field topology of the solar corona. The direction of the coronal magnetic field vector would be derived from narrow-wavelength bandpass observations of the linearly polarized FeXIV line-emission (530.3 nm), interpreted through the "saturated" Hanle effect. CorMag is an internally-occulted coronagraph whose design was derived from the externally-occulted, formation-flying ASPIICS coronagraph of the PROBA-3 ESA solar mission. This mission is a demonstrator for future space-based coronagraphs with the capability of visible-light and infrared polarization measurements for coronal magnetic field diagnostics. The instrument is a development of the INAF - Astrophysical Observatory of Turin, Italy.

The balloon was launched by auxiliary balloon method at 11:15 utc on August 17, 2022. After a nominal ascent the balloon reached float altitude of 37.5 km at 13:48 utc and remained at that altitude until termination which ocurred at 20:02 utc. The payload landed at 20:43 utc SW of White River, Ontario, Canada after a total flight time of 9 hours and 28 minutes.