Balloon launched on 8/12/2022, from Timmins Stratospheric Balloon Base, Ontario, Canada 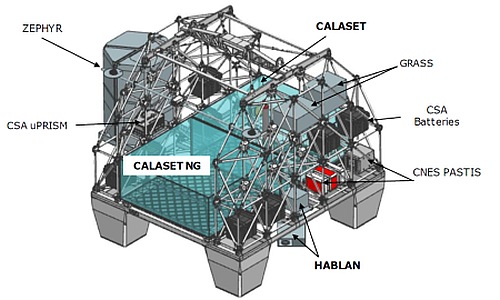 The CALASET mission was the first flight of the Strato Science 2022 campaign aimed to test several Canadian and European experiments in a nocturnal flight with different ceilings and slow descent at the end. At left we can see an scheme of distribution of the payloads in the platform (click to enlarge).

It used as platform CARMENCITA a multipayload gondola originally introduced in late 2012 by the Nacelles Pointees (Pointed Platforms) CNES team and was developed with several concepts in mind: modularity to allow the inclusion of several instruments devoted to the same or different research areas in one mission, reusability to overcome the difficult to adapt a platform specifically designed around an instrument to another, thus reducing costs and developing times and finally cargo volume which is maximized to allow the installation of many instruments. This particular version of the platform was built in Montreal based on the original CNES design and allows the experimenters to start the integration process of their experiments in advance of the arrive from France of the CNES hardware.

Canadian Atmospheric Laser Absorption Spectrometer Experiment Test-bed (CALASET) a collaborative project between University of Toronto and University of Alberta to design laser spectrometers for stratospheric balloon flight. Instruments are constructed to be both highly sensitive and mechanically robust. The first generation of CALASET is an infrared laser spectrometer built for in-situ sensing of CO2 and N2O on a stratospheric balloon gondola. Wavelength modulation spectroscopy (WMS) techniques are used to collect and visualize spectra during flight and to perform post-flight analysis.

GRASS (Gamma-Ray Astronomy Small Sensor), supported by the HEMERA program, ASI, and AHEAD, is an INAF project led by Dr. Lorenzo Natalucci. The instrument is a small, innovative gamma-ray detector aimed at measure the parameters of the cosmic and atmospheric background in the north pole region. This is fundamental to correctly analize the high energy data.

Finally was installed onboard a Zephyr gondola similar to the ones used in the the intertropical balloon campaigns Strateole-2. The gondola contained three experiments: VATA a sonic anemometer developed by Institut Pierre-Simon Laplace (IPSL), BIS a detector for infrasounds generated by earthquakes developed by ISAE/SupAero, an aeronautics engineer school in Toulouse, France and XStorm a lightweight instrument to detect terrestrial Gamma Ray flashes emitted by thunderstorms developed by LPC2E, University of Orleans.

The balloon was launched from Timmins Stratospheric Balloon Base by auxiliary balloon method at 5:28 utc on August 12, 2022. After a nominal ascent the balloon reached an initial float altitude of 32.6 km at 8:06 utc which was maintained until 11:05 utc when a slow descent was initiated to reach 20 km at 13:55 utc. That new altitude remained constant until 16:59 utc when a new descent was initiated to reach 14.3 km at 18:15 utc. Finally at 18:22 utc the payload was separated from the balloon landing at 18:48 utc about 40 miles NE of Saulte Sainte Marie, Ontario. Total flight time was 13 hours and 14 minutes.