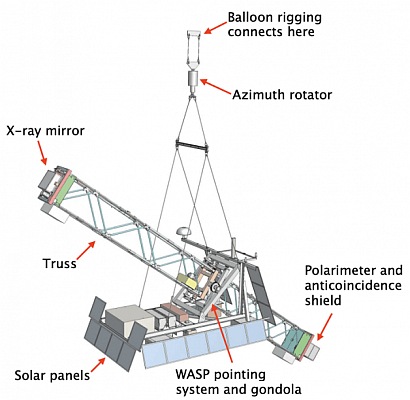 XL-Calibur is a hard X-ray polarimetry mission operating from a stabilised balloon-borne platform in the stratosphere aimed to observe black holes such as Cygnus X1, and to measure for the first time the polarization of the X-ray emission. The polarization makes it possible to test models of the origin of the X-rays and to map out the spacetime surrounding the black hole.

The project is led by Washington University, St. Louis with the participation of Ehime University, Hiroshima University, Osaka University and ISAS-JAXA from Japan, the University of New Hampshire, the NASA Wallops Flight Facility and Goddard Space Flight Center (GSFC) and the KTH Royal Institute of Technology from Sweden. It builds on heritage from the X-Calibur mission, which flew in a long-duration balloon in Antarctica in austral summer 2018/2019.

At left we can see an scheme of the instrument in flight configuration (click to enlarge).

The XL-Calibur mission incorporates a 12 meter long truss equipped with an X-ray mirror at one end and a scattering polarimeter at the other end. The truss assembly is mounted in a custom gondola, which incorporates a pointing system known as WASP (Wallops Arc Second Pointer). The gondola is suspended beneath a modified NASA rotator, which provides large-angle azimuth targeting and coarse azimuth stabilisation. The WASP system points the truss using a pitch/yaw articulated gimbal mounted on the gondola. Sub-arcsecond pointing is enabled by the mechanical design of the gimbal hubs, where high-precision angular contact bearings float the rotor-side and stator-side of the hub on a central shaft. To orient the gondola, XL-Calibur uses two star cameras. One star camera is co-aligned with the X-ray mirror, and the other is oriented 25º from the pointing axis. The second star camera enables pointing at elevations exceeding 65º (through the balloon), and pointing at targets in the presence of stratospheric clouds along the line-of-sight.

The XL-Calibur truss has been built on the flight-proven design of the X-Calibur truss composed of five parts, which bolt together: the centre frame of welded aluminium with protruding hubs, which attach to the WASP gondola; the two-part mirror truss, with an aluminium-composite honeycomb panel carrying the 12 m focal length X-ray mirror; and the two-part detector truss, which holds another honeycomb panel, housing the polarimeter-anticoincidence shield assembly. To maintaining thermal control of the payload -to assure polarimeter uniform response, and that the truss does not deform due to differential heating effects- all surfaces exposed to solar radiation were covered in reflective aluminised mylar sheets, and white teflon tape.

The instrument uses the 12 m focal length mirror originally fabricated for the FFAST mission. The mirror is identical to that used in the Hitomi Hard X-ray Telescope but without the precollimator. It has a diameter of 45 cm, and is made of 213 nested shells of aluminium reflectors. Each reflector is coated with a platinum-carbon multilayer coating.

The XL-Calibur polarimeter is very similar to the one used in X-Calibur. Incident photons pass through a tungsten collimator and impinge on a 1.2 cm diameter, 8 cm long, beryllium rod. The diameter is matched to the mirror so that 67% of the X-rays collected by the mirror impact the rod. The beryllium rod is surrounded by 4 sets of 4 circumadjacent CZT detectors. The collimator prevents direct illumination of the CZT detectors by the focussed beam. The polarimeter continuously rotates about the viewing axis (approximately twice per minute), which mitigates systematic effects arising from any non-uniform instrument response.

To mitigate particle backgrounds in the stratosphere the polarimeter is housed inside an anticoincidence shield. BGO scintillators are used rather than the CsI(Na) used in X-Calibur. BGO has a higher stopping power and also benefits from a faster decay time. The shield comprises two parts: an inverted well, which covers the top and sides of the polarimeter, and a puck, which covers the bottom of the polarimeter. Each BGO crystal assembly is housed in a light-tight aluminium structure. The two parts of the shield are bolted together, with slots provided in the mechanical structure for routing the polarimeter cables.

Power is provided by photovoltaic arrays. Power consumption is 210 W for the polarimeter and mirror heaters and 250 W for the WASP and NASA Columbia Scientific Ballooning Facility (CSBF) subsystems (telecommand / positioning / communications).