Developed by University of Kentucky 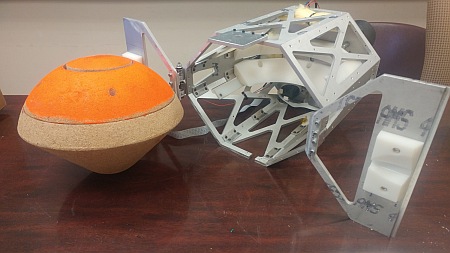 KRUPS acronym for Kentucky Re-Entry Universal Payload System is a small re-entry capsule designed as a technology test-bed, built at the University of Kentucky. For its first incarnation, KRUPS has been designed to test Thermal Protection System (TPS) material and instrumentation. TPS are used to protect spacecraft from the extreme conditions of planetary entry. The overall objective is to launch KRUPS from the International Space Station, and use the capsule to obtain atmospheric entry data for numerical model validation. To reach that step, a series of system validation steps are needed to raise the technology readiness level to a flight-ready status.

This drop test from a balloon was part of the developmental path of the project. Near Space Corporation, made possible the flight with funding from NASA's Flight Opportunities program. At left we can see an image of the KRUPS unit prior to the test. The metal enclosure holds the small capsule and opens to release it at the appropriate altitude. Although the balloon did not expose KRUPS to the temperatures needed to test its thermal protection, it has provided an important preparatory step allowing researchers to test the technology's electronics and communications systems to validate their performance and help ensure the success of an upcoming orbital reentry mission.

Later in 2021, three KRUPS units, along with other research payloads, will travel to the International Space Station aboard Northrop Grumman's Cygnus spacecraft. These capsules will gather data to better understand the hypersonic environment and thermal response of heat shields while re-entering the atmosphere. The units will stay on the resupply vehicle when it is loaded with trash and waste from the station, which is disposed of by burning during re-entry into Earth's atmosphere. The KRUPS units will release from the resupply vehicle as it breaks apart during the burn and are expected to survive re-entry because of their heat shields. The KRUPS units will splash down in the Pacific Ocean and will not be recovered; however, researchers will use data sent via satellite from the units during reentry and descent to validate algorithms that increase the robustness of TPS designs.

The balloon carrying the KRUPS capsule was launched by a team Of Near Space Corporation from Madras Regional Airport at 13:00 utc on April 15, 2021. After reaching a safe zone the capsule was released about 15:35 utc from an altitude nearing 88.000 feet. It impacted the ground about 5 minutes later in a point located in the Oregon Baldlands Wilderness in Deschutess County. The balloon continued its flight towards the east. Last known position was on the next day near Boise, Idaho.