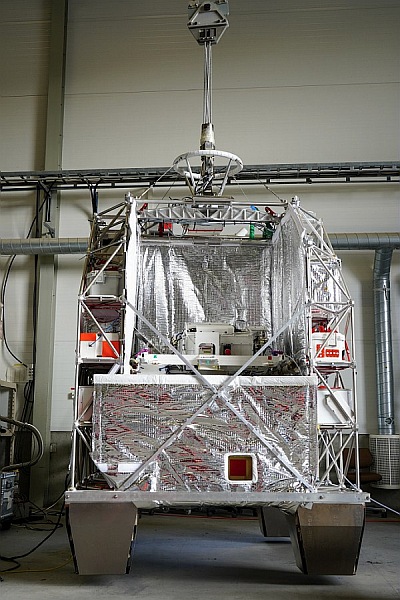 The objective of this particular mission was to transport several experiments from German and Canadian institutes related to the study of climate and greenhouse gases in the Arctic zone. For this purpose, was used a CNES developed gondola denominated CARMEN composed of a structure made of steel struts and balls with dimensions of 2.45 m x 1.85 m x 3 m. Total mass of the gondola is 210 kg being capable of transporting several payloads up to a mass of 700 kg. The gondola counts with a system por fine pointing if required.

The four experiments transported onboard were:

GLORIA (Gimballed Limb Observer for Radiance Imaging of the Atmosphere) a joint development of the Helmholtz Large Research Facilities Karlsruhe Institute of Technology (KIT) and Research Centre Jülich (FZJ) from Germany. Build upon the heritage of both institutes in developing and operating IR limb sounders like CRISTA and MIPAS, GLORIA bridges the gap from scanning to imaging in the infrared spectral domain by combining a classical Fourier transform spectrometer (FTS) with a 2-D detector array tailored to the FTS needs. Imaging allows the spatial sampling to be improved by up to an order of magnitude when compared to state of the art limb scanning instruments. In addition to the limb mode the instrument can also perform Nadir measurements. GLORIA was designed to operate on various high altitude research platforms like the M-55 Geophysica and stratospheric balloons.

Total BRO an instrument developed at the Institut für Umweltphysik, Heidelberg (Germany) aimed to obtain precise measurements of the total distribution of Bromine in the stratosphere. For this purpose, it uses Differential Optical Absorption Spectrometry (DOAS) in the ultraviolet domain. The measurements are taken with optical grating spectrometers using either direct sunlight or scattered skylight, and different observation platforms such as aircraft (Falcon, HALO, Geophysica), unmanned air vehicles (UAV), or high altitude balloons.

ALI V2 (Aerosol Limb Imager Version 2) an atmospheric monitoring tool developed by the University of Saskatchewan that measures the concentration of aerosols in the upper atmosphere using a unique optical device. The one flown in this mission wa an improved version of an instrument that was successfully deployed on a stratospheric balloon in 2014 and 2017. The upgraded version of ALI can detect a wider range of optical wavelengths, measuring both orientations of the polarization state. The development of the instrument is supported by the CSA's FAST funding initiative.

HIPTA developed at the Defence Research and Development Canada center Valcartier is a technological project to demonstrate the effectiveness of a high-sensitivity Earth observation camera.