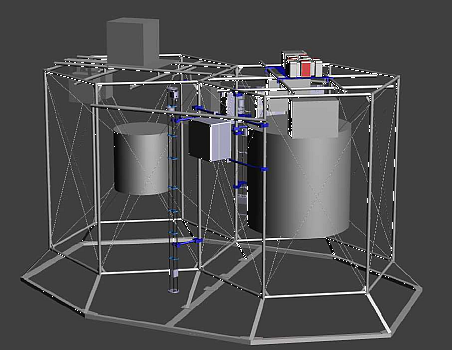 The payload whose scheme we can see at left, was composed by several experiments which were acomodated in a TWIN gondola, a lightweight unpointed framed structure with dimensions 2,6 meters wide by 4 meters long by 2,2 meters height with a full loaded total mass of 320 kg.

One LISA sampler from University of Groningen to obtain samples of CO2, CH4 and CO

The balloon was launched by auxiliary balloon method at 21:18 utc on August 12, 2021. The flight developed with a first ceiling at 33 km altitude from 2 to 6 hours, followed by a slow descent to 19 km, and a new ceiling between 2 and 6 hours before separation.

After a trajectory of 70 km, the point of separation was 1.2 km from the pre-flight simulation, and the landing point was only 1.8 km from the forecasted one, a new precision record for CNES balloon operations.