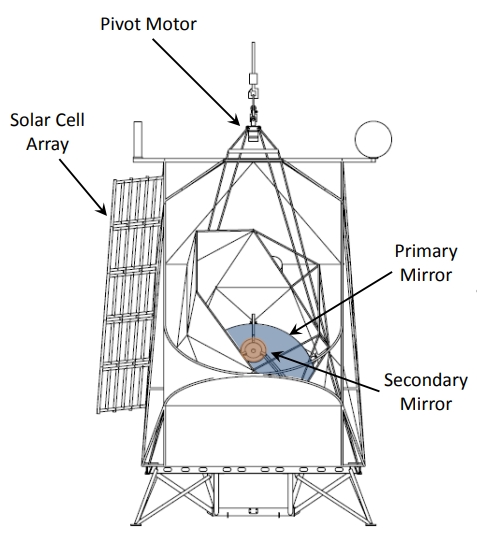 BLAST-TNG stands for Balloon-borne Large Aperture Sub-millimeter Telescope - The Next Generation. It's a new telescope designed to observe the polarized thermal emission from interstellar dust. The data it collects will provide new insight into the properties of dust and the role of magnetic fields in the interstellar medium through a wide range of densities. It continues the legacy of BLASTPol another instrument flown on a long-duration stratospheric balloon flight in Antarctica. At left we can see an scheme of the instrument (click to enlarge).

BLAST-TNG uses an on-axis Cassegrain telescope, with a 2.5 m-diameter primary mirror, and a 57 cm-diameter secondary mirror. The primary is meant to be the largest mirror ever flown on a balloon, and the largest submillimeter carbon fiber mirror in operation. The telescope will have a resolution range of 25" to 50" with a ~22' diameter field of view. The Cassegrain telescope focuses the beam into a cryogenic receiver, where a series of mirrors re-image the beam onto the three detector arrays. These "cold optics" are cryogenically-cooled to 4 degrees Kelvin. Polarization modulation is provided by a wide-band metal-mesh half wave plate, which is stepped periodically during observations to allow for the removal of systematic polarization errors.

BLAST-TNG uses a Liquid-Helium-cooled cryostat to keep the optics bench with the re-imaging optics near 4 K. The detector arrays are cooled below 300 mK using a closed-cycle 3He refrigerator on the 4 K. Additional thermal isolation of the 4 K stage from the 300 K exterior is provided by two vapor cooled shields. These use heat exchangers to extract cooling power from the Helium vapor that is boiled off during the normal course of operations. A 250-liter Helium tank give the instrument a hold time of about 28 days, enough time to observe a rich sample of targets across the southern sky.

The BLAST-TNG receiver is based on Microwave Kinetic Inductance Detectors (MKIDS) which are superconducting resonators that change their resonant frequency in response to the absorption of incident photons. The MKIDS represent a promising detector technology for the next generation of balloon-borne and space-based Far-Infrared (FIR) missions and are implemented for the first time on BLAST-TNG. The detector readout is composed by a set of five, 1024-channel digital filterbank spectrometers based on the second-generation Reconfigurable Open Architecture Computing Hardware (ROACH-2), an open source digital signal processing platform developed by the Collaboration for Astronomical Signal Processing and Electronics Research (CASPER). BLAST-TNG will mark the first time that such a readout platform has been flown on a long duration balloon flight.

The gondola used for BLAST-TNG is based on the BLAST gondola that flew five times since 2006 but with significant redesigns to accommodate the larger primary mirror and receiver. It comprises two major mechanical systems. The first is an outer frame that allows the telescope to rotate in azimuth with respect to the balloon. This is achieved via a high moment of inertia reaction wheel located below the receiver, and a pivot motor that couples the flight train to four aircraft cables located at the corners of the frame. The outer frame also houses the flight control electronics, solar array batteries and charge controllers that power the receiver, and supports the inner frame on large ladder-like supports. The inner frame is a stiff structure that supports the mirror assembly, cryogenic receiver, and detector readout electronics. The inner frame is precisely pointed in elevation with respect to the outer frame with a direct drive motor, and is actively balanced about its rotation axis.

A series of aluminized Mylar baffles and sunshields on both the inner and outer frame protect the telescope from thermal changes during flight and shield the sensitive optics from direct sun. They are optimized to allow BLAST-TNG to point to within 40 degrees in azimuth of the sun, over a range in elevation from 20 to 55 degrees.

The full loaded instrument weight is about 5.000 lbs. 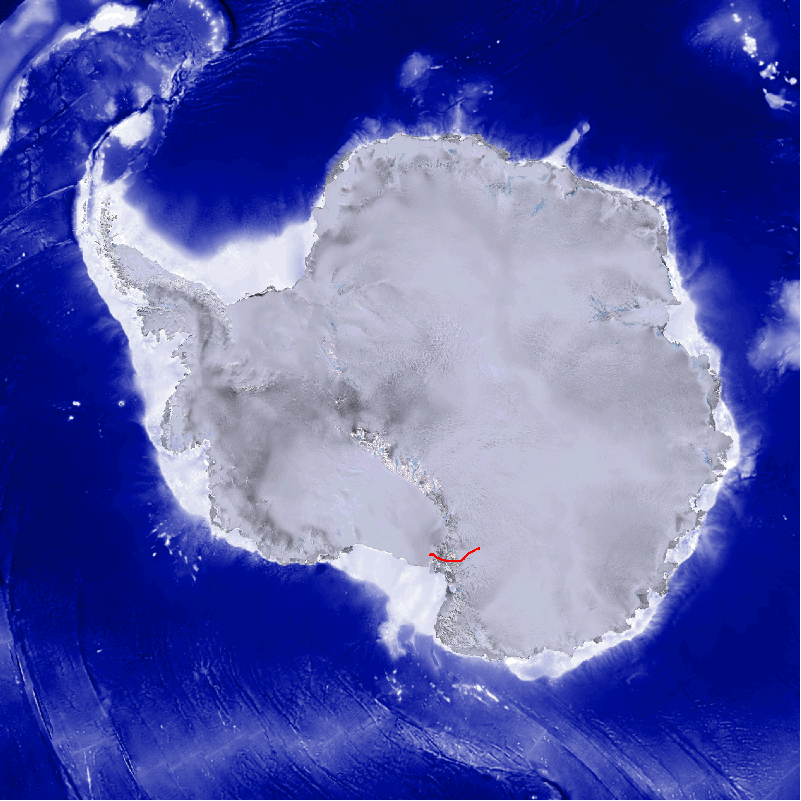 The balloon was launched by dynamic method at 5:00 utc on January 6th, 2020. After achieving float altitude of 119.000 ft, the balloon started to move anti-clockwise above Antarctic Plateau. However, nine hours into the flight, the scientific team discovered that they loss their ability to point the instrument as desired. Decision was taken to terminate the flight as soon a safe place for recovery was reach. The instrument and balloon were separated at 00:15 utc on January 7th, 2020.

The failure was traced to the launch operation, when the collar -a special canvas used to restrain the inflated bubble of the balloon at launch- was released and unfortunately hit the payload and
in particular one of the structural components, the spreader bar. The damage was not immediately spotted since this component was designed with a very high factor of safety. However, the carbon fiber structure slowly degraded until a catastrophic failure after approximately 14 hours of flight. Much of the instrument (including the receiver) was destroyed due to a rough impact and drag upon landing, however the primary mirror and many subsystems (such as the readout and control electronics, motors, and hard drives) were successfully recovered during an intense recovery campaign.

Despite the short flight duration, the instrument worked very well and is providing significant information about each subsystem that will be invaluable for future balloon missions.