Balloon launched on 9/2/2019, from Timmins Stratospheric Balloon Base, Ontario, Canada

The main experiment onboard that gave the mission's name was the Limb Imaging Fourier transform spectrometer Experiment (LIFE) developed by a cooperation between the University of Saskatchewan, Environment Canada, ABB Inc. and the Karlsruhe Institute of Technology from Germany. The instrument is a prototype of a satellite remote sensing instrument designed to take measurements of key atmospheric greenhouse gases on-board a high-altitude balloon gondola, to test the concept and provide insight towards future versions of the instrument. It take measurements from the stratosphere, providing a vertical profile from the lower stratosphere to the upper troposphere, known as the UTLS region, an important region for understanding climate change.

HIDRON a stratospheric glider developed by Stratodynamics Aviation inc. which was released during the flight from an altitude of 114.000 ft and performed and autonomus gliding to the ground.

Stratospheric Optical Rubidium Clock Experiment (SORCE) developed at the University of Toronto and aimed to demonstrate a portable remotely-operated optical atomic clock on a stratospheric balloon platform, as a first step towards a functioning space-based system.

Otachi-8 and ProtosAT-4 two experiments to test radio communication and power modules, and film the ascent of a CubeSat developed by Nanikana Aerospatiale

Atmospheric Cloud Chamber of the Okanagan University (AC2O) aimed to investigate particles in Earth's upper atmosphere that originate from primary cosmic rays. The experiment is sponsored by the University of British Columbia, as part of the Canadian Stratospheric Balloon Experiment Design Challenge (CAN-SBX) led by Students for the Exploration and Development of Space (SEDS Canada)

High-Altitude Balloon (HAB) a microbial aerosols sampling experiment led by the Western University, as part of the CAN-SBX Challenge led by SEDS Canada. The goal is to obtain bio-aerosols and moisture samples vertically throughout Earth's atmosphere.

Payload Remote Interface, Sensor Suite and Mass Memory Subsystem (PRISM) a multi-purpose electronics box that provides onboard Ethernet ports for payloads and offer various services to users, such as real-time localization and attitude, during the entire flight. Power Distribution Unit and Battery a modular subsystem composed by a set of Li-ion batteries and a power distribution unit developed to support payloads power requirements during STRATOS flights and a Solar Cell Experiment. 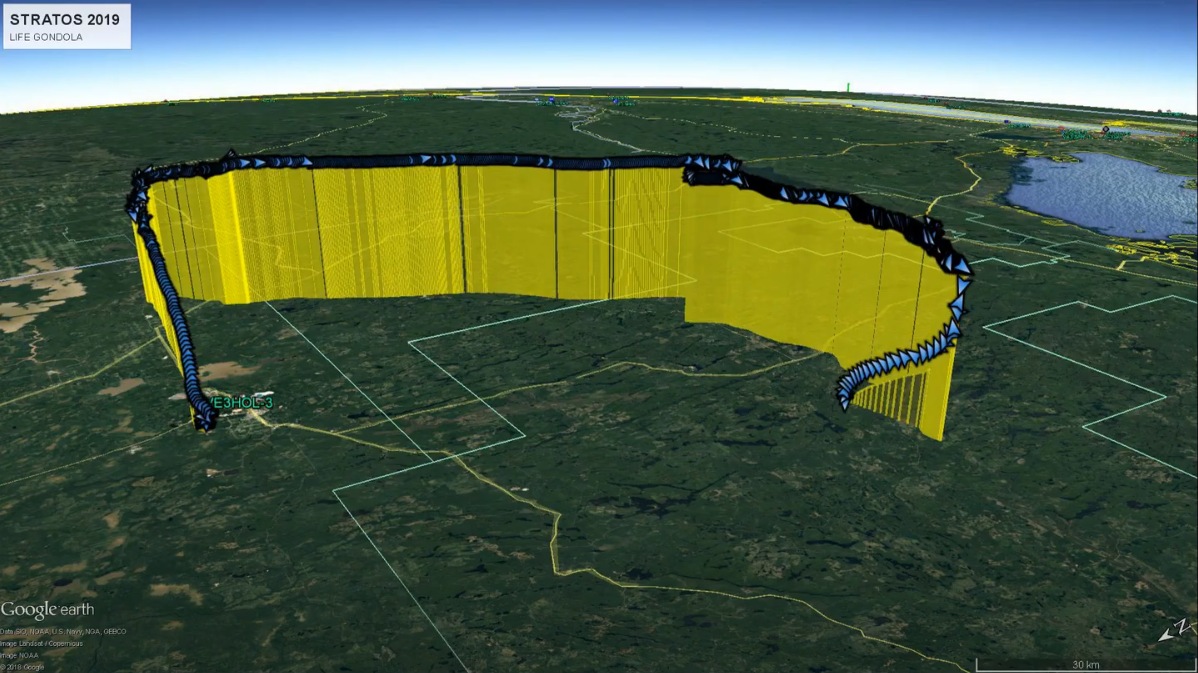