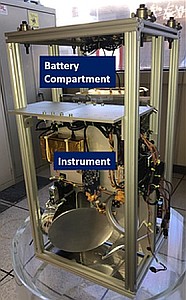 The ReckTangLE II (Reck-Tang Limbsounder Experiment II) is an improved version of a two band CMOS spectrometer developed for high altitude balloon flights in the upper stratosphere developed as part of a joint project between NASA's Jet Propulsion Laboratory and the University of California, Los Angeles.

The instrument detects and maps water vapor as well as several other pollutants. The ReckTangLe features a 500-600 GHz spectrometer band focused on NO2, O3, and other pollutant spectral lines, with the front-end receiver provided by the JPL sub-millimeter wave group.

Unlike the early version planned to be launched as a piggyback payload onboard more complex systems, ReckTangLE-II is a self supporting experiment which counts with it's own navigation, tracking and command/telemetry systems as well as it's own power system and landing/recovery system.