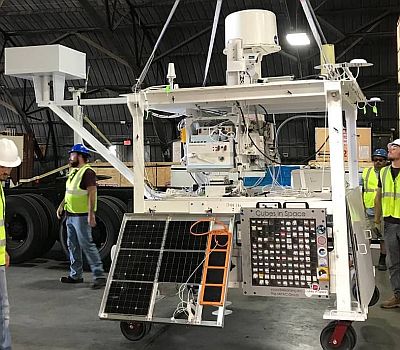 The primary objective of the mission was to raise the technology readiness level of several balloon systems in development or already flown. For this purpose a technological square gondola built by the Columbia Scientific Balloon Facility was used as we can see in the picture at left. Among the items tested during the flight were the LCT2-20 TDRSS Transceiver, a new lightWeight rotator, a hand launch CDI termination system, the EVTM Test Telemetry System, SPB support systems, and more.

MARSBOX (Microbes in Atmosphere for Radiation, Survival, and Biological Outcomes eXperiment) a collaboration between the German Aerospace Center (DLR), NASA Ames Research Center and Kennedy Space Center in Florida, which carried different types of microorganisms -bacteria, filamentous fungi (mold) and yeast - inside an aluminum container which were exposed the microbes to simulated Mars amosphere, pressure, temperature and UV-radiation conditions.