Balloon launched on 8/16/2018, from Timmins Stratospheric Balloon Base, Ontario, Canada 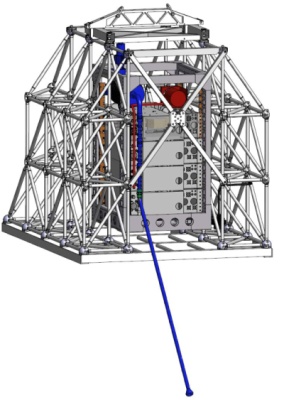 It was born in order to replace another instrument called SPIRALE developed by LPCE but which can no longer fly. LPC2E along with CNES developed SPECIES based on the Optical Feedback Cavity Enhanced Spectroscopy (OF-CEAS) technique combined with mid-infrared quantum or interband cascade lasers (QCLs or ICLs). The instrument is usable both in balloon or aircraft and on the ground to optimize its exploitation.

In the scheme at left we can see the SPECIES experiment integrated into a generic CNES balloon gondola structure (click to enlarge).

How SPECIES work?: a QCL laser emits its beam in a resonant cavity formed of three mirrors of very high reflectivity. Some of the light coming out of this cavity returns to the laser so it can therefore be considered as an external cavity of the laser, which then emits preferentially a beam at the wavelength of the transmission peaks of this cavity. The lifetime of the photons trapped in the cavity being very long, the interaction length of the photons with the gas present between the mirrors can reach tens of km (against <0.5 km for SPIRALE), thus making it possible to obtain very low detection limits.

The measurement principle consists in performing a current sweep of the QCL which will "hang" on the successive peaks of the cavity. The presence of a molecular line of an absorbing gas will then result in a drop in the signal. The quantitative measurement of the concentration of this gas requires knowing the lifetime of the photons. This is achieved by turning off the laser at the end of the scan (ring-down measurement).

The general architecture of SPECIES is based on the realization of several interchangeable modules compatible with the format of 19-inch racks easily integrated into standard bays used in research aircraft. Each rack is a complete OFCEAS system. General systems dedicated to balloon or airplane experiments such as power supply and distribution, pumping, TM-TC or HMI systems are specific systems also grouped together in the same bay.

A set of a SPECIES bay with three instrumental racks weights about 100kg and have a peak consumption of 800W.