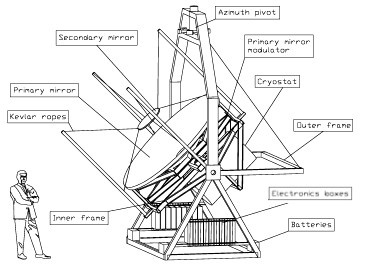 OLIMPO is a mm/sub-mm waves telescope, with a 2.6 meter diameter primary coupled to four arrays of cryogenic detectors working in the 150, 220, 350, 480 GHz bands. This range extends at high frequency and with similar resolution the observations of 10 meter-class ground-based telescopes. The instrument is meant to work at an altitude of 38 km, flying with a stratospheric balloon, in a long-duration circumpolar flight during the arctic summer, taking advantage of the extreme transparency of the stratosphere.

The OLIMPO experiment uses the Cosmic Microwave Background (CMB) as a backlight to study the largest structures in the Universe. It is optimized to detect the inverse Compton scattering of CMB photons crossing clusters of galaxies (also known as the Sunyaev-Zeldovich effect, or SZ). Using the SZ, OLIMPO can detect very distant galaxy clusters, which could not be detected in other ways. Additional science targets of OLIMPO are the spectral-spatial anistropies of the CMB and neutrino masses from high-angular resolution maps of the CMB.

At left we can see a detailed scheme of the telescope on his gondola. The mm-wave telescope of OLIMPO has a 2.6 m diameter primary mirror and a 0.6 m diameter secondary. Based on a classical Ritchey-Chretien configuration, the telescope has been optimized to scan the sky by tilting the primary mirror around a cross-elevation axis. The telescope is protected by a set of large, optimized ground-shields and sun-shields, to limit the effect of straylight and sidelobes. The focus of the telescope is located inside the cryostat. The beam is reimaged through a set of 3 cold mirrors, the second one being the cold stop of the system, and split by 3 dychroic beamsplitters into 4 photometric channels, each one containing one array of bolometers. An innovative differential Fourier Transform Spectrometer is used to achieve moderate spectral resolution (2-6 GHz) within the 4 detection bands.

The cryogenic system is a classical LN/LHe aluminum cryostat with a 3He refrigerator. Both are improved versions of the ones used in the BOOMERanG instrument. Its purpose is to cool the detector arrays at 0.3K, and the reimaging optics (filters, mirrors, cold Lyot stop) at 1.6k. The hold time or autonomy of the 3He refrigerator at 0.3K is about 12 days, with a re-cycling time of 8 hours while for the LHe and LN fluids the autonomy is about 14 days.

The detectors used for OLIMPO are Kinetic Inductance Detectors developed in a collaboration between Sapienza, IFN-CNR and Arizona Sate University. These detectors are close to be photon noise limited in the stratospheric environment with a room-temperature telescope and FTS.

The OLIMPO attitude control system is composed of a tiltable inner frame, including the telescope, the spectrometer and the detectors cryostat, and an outer frame containing all the other systems and connected to the balloon through an azimuth pivot and the flight chain. OLIMPO points the desired sky region using a combination of azimuth and elevation movements. The azimuth actuators are a flywheel and a motor torquing against the flight chain. The elevation actuator is a linear motor modifying the tilt of the inner frame with respect to the outer frame. The attitude sensors for real-time control are a set of 3-axis laser gyroscopes, while the elevation sensor is a 16-bit optical encoder. The main sensor for attitude reconstruction is a red/IR star camera, able to detect all the stars of magnitude 7 in a 2º x 2º field. 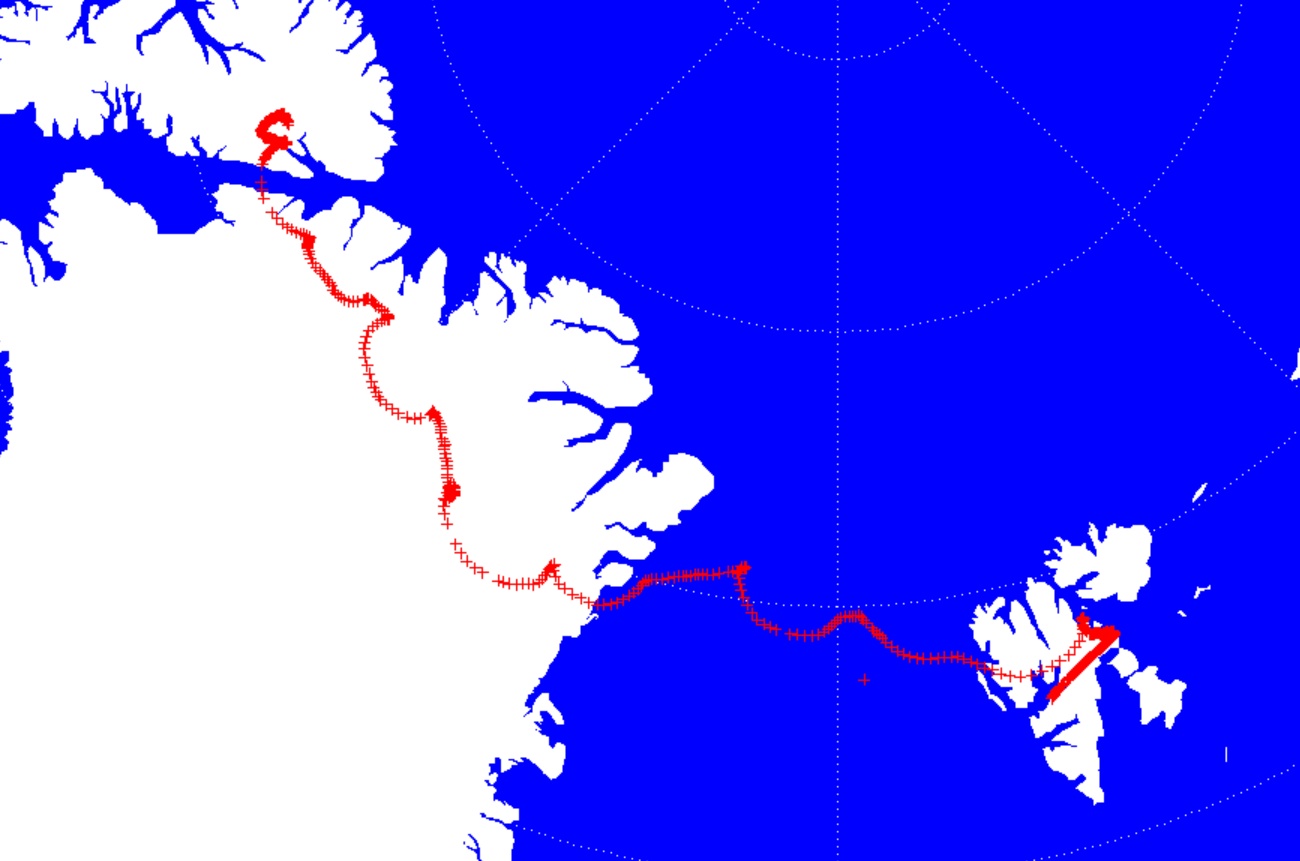 The balloon was launched by dynamic method from the airstrip of the Longyearbyen Airport in Svalbard on July 14 2018 at 7:05 utc. Once released it moved NE while ascending until reaching the float altitude of 37.8 km and changed its course, crossing again the Spitzbergen Island in the opposite direction starting a westward flight path over the Greenland Sea.

This route led the balloon to cross the north part of Greenland entering by Christian Land in the NE to left the island overflying Washington land in the NW side. Soon after crossing the Davis Strait and entering to overflight Ellesmere Island, the simulations of the trajectories indicated that the balloon would hardly have traveled the planned circumpolar route to return to the Svalbard Islands, Greenland or the North of Canada, due to the changed conditions of stratospheric winds. As a result at at 2:28 utc, on July 19 the payload was separated from the balloon. The payload landed in dry soil near the Quttinirpaaq National Park.