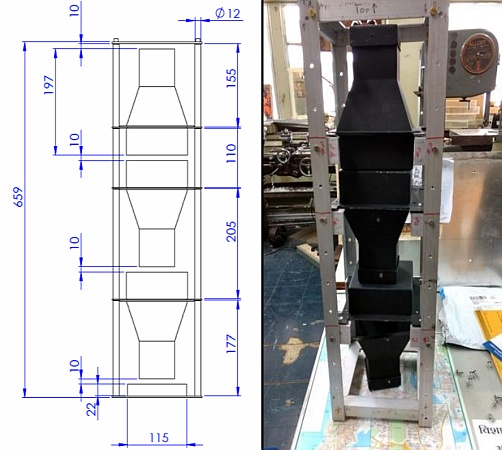 Project Apeiro was an experiment led by undergraduate students from Birla Institute of Technology and Science, Pilani at Goa Campus in collaboration with TIFR. The goal of the mission was to determine cosmic radiation flux in the lower stratospheric regions of the earth's atmosphere over the Indian subcontinent. This study will help to determine radiation exposure risks to aviation and space flight crews. Apeiro was the country's first near-space experiment completely developed by students.

The instrument flown was composed by a Photomultiplier Tube (PMT) -Hamamatsu R6233- connected to a plastic scintillator block of 100mm x 100mm using optical glue that maintained a consistent refractive index across the coupling. The PMT was operated at a high DCvoltage of 1000V, which is generated by an onboard DC-DCHV converter. A PMT based drive circuit, was used to bias the PMT dynodes. The entire assembly was covered with a thick sheet of black paper (called "Tedler") to prevent stray light from outside entering the sensitive detector. This detector assembly was then inserted inside an aluminum enclosure to protect it from electromagnetic interference.

Three scintillation detectors similar to the described above were constructed and stacked vertically one above the other, in order to obtain "coincidence" of signals by all three scintillator detectors. This geometrical arrangement provided an aperture of 46.81º and allowed to detect over 49% of the incident cosmic ray particles. Analog signals from each of the three scintillation detectors were sent to the data acquisition system for processing. In flight the information was telemetered to the ground along with housekeeping data.

Also, TIFR balloon facility tested during the flight up to 44,800 feet a new altitude encoder.

The balloon was successfully launched on 2nd February 2018 at 02:12 hrs (IST) which carried a total suspended load of 65.4 kg including 25 kg ballast powder. The balloon reached its first ceiling altitude of 24.8 km in 1 hr 19 mins and floated for one hour and reached its second ceiling altitude of 26.7 km by dropping 25 kg ballast in intervals and allowed to float for 30 mins. This was the first time a zero pressure balloon floated at two different float altitudes. After completing the experiment, the flight was terminated at 5:17 hrs (IST). The payload was recovered from 32 km north-west of TIFR Balloon Facility