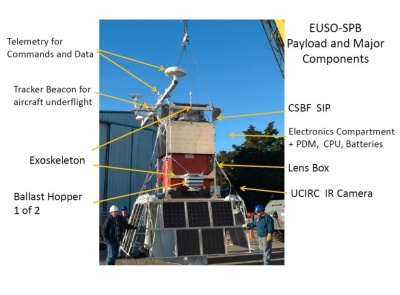 The primary objective of the mission was to perform a long duration flight test of NASA's Super Pressure Balloon (SPB) carrying a scientific payload as a mission of opportunity.

The SPB is a pumpkin-shaped sealed structure that is filled with a measured and specific amount of helium lifting gas which always maintains a positive internal pressure in relationship to the environment it is floating in. The balloon is filled with an amount of helium needed to lift the entire flight system plus some extra gas to provide an upward force known as the free lift. Once launched, the balloon ascends but unlike occurs with conventional or so called Zero-Pressure (ZP) balloons when it reaches the desired float altitude, the extra helium is not vented off, but fills out the shape and pressurizes the balloon. This extra helium is enough to pressurize the balloon and also to over-pressurize the balloon to the design limits.

Description of the scientific Instrument

EUSO-SPB (Extreme Universe Space Observatory for Super Pressure Balloon) is part of a larger project called JEM-EUSO, a new type of observatory to be installed on the Japanese Experiment Module (JEM), a external science module developed by JAXA, which is part of the International Space Station. It will be based on a ultraviolet very large telescope, which uses the whole Earth as detector. It will observe, from an altitude of several hundreds of kilometers, the fluorescence tracks produced at 330-400 nanometers by Extensive Air Showers originated by Ultra High Energy Cosmic Rays which traverse the Earth's atmosphere at ultra-relativistic speed. 16 Countries, 89 Institutes and 311 researchers are collaborating in JEM-EUSO, with the support of the most important International and National Space Agencies and research funding institutions.

At present the JEM-EUSO program involves the realization of small different fluorescence detectors already installed or to be installed on ground (EUSO-TA), on board stratospheric balloons for short (EUSO-Balloon) or long duration (EUSO-SPB) flights, inside the International Space Station (Mini-EUSO) and of a much larger detector to be attached outside the ISS (K-EUSO). EUSO-SPB is the second generation of the balloon-based version of EUSO. The first one denominated EUSO-Balloon was flown in August 2014 over Canada in collaboration with the French Space Agency CNES. It was equipped with one full original JEM-EUSO PDM (photon detection module with 2304 pixels) and with an optical system made of two Fresnel lenses, with a side of 1 meter covering a field of view of ±6 degrees, which were real prototypes of those foreseen in JEM-EUSO plus a stand-alone and waterproof infrared camera.

The EUSO-SPB instrument was an updated version of that same experiment. It included also a full original JEM-EUSO PDM, and an optical system with three Fresnel lenses with a side of 1 meter covering a field of view of ±6 degrees, one of them designed to provide chromatic focusing over the UV spectrum of the track. The more significant improvement -besides the engineering adaptation of the whole instrument electronics, command systems and power from a short duration flight profile to a large one- is the inclusion of a new version of the trigger system to "catch" the high energy cosmic ray events. The main scientific objective of the mission was to obtain the first observation and measurements of Ultra High Energy Cosmic Ray Air Showers by looking down from near space with a fluorescence detector; the observation of UV pulse like signatures from other objects as meteoroids, electrical phenomena in the atmosphere and finally the measurement of slow variations of UV light as airglow or bioluminescence even over the ocean.

Video of the launch, ascent and view at float of the balloon

The SPB was launched as mission 679NT at 22:49 utc on April 24, 2017 from the Wanaka Airport in New Zealand. After a nominal ascent the balloon reached float altitude around 109.000 ft, and during the following hours NASA performed a careful examination of the balloon surface using the onboard cameras on top of the gondola. The balloon then crossed the eastern tip of the Southern Island, entering the Pacific Ocean over Pegasus bay, east of Christchurch. The following day, the balloon maintained the NE bound course following a more or less parallel line to the New Zealand coast.

In the second night around 5:30 AM on April 27, as soon the Sun dissapeared below the horizon, the SPB started a steady altitude drop which would take it a few hours later to hit 92.000 ft. Next night occured the same, and so on until April 30's night when the balloon reached so far the lowest point of the entire flight: 56.000 ft. Definitively, something was wrong and the behaviour of the SPB resembled the normal night/day cycle followed by a Zero Pressure Balloon. The only possible answer was that the balloon had developed at some point a leak.

The pattern repeated every sunset until the night of Saturday May 6th. After approaching some 220 km to Easter Island the sunset arrived about 23:12 utc while the SPB was still 3800 km from the South American coast. Around 00:12 utc, with the sun below the horizon, the SPB started it's usual way down. One hour after it was at 97.000 ft and descending, but by 2:45 utc it hit the lowest point of the entire flight, 50 kft and descending to 47.000 ft. A few minutes after, termination procedures were initiated but unlike occur in most missions the balloon was not separated from the payload, and fell to the ocean surface still attached to the payload. Using this technique, the payload acted like a counterweight or anchor that dragged the balloon fabric to the bottom of the sea with it. By doing this, NASA prevented the balloon from the possibility of remaining on the ocean surface and near most marine life.