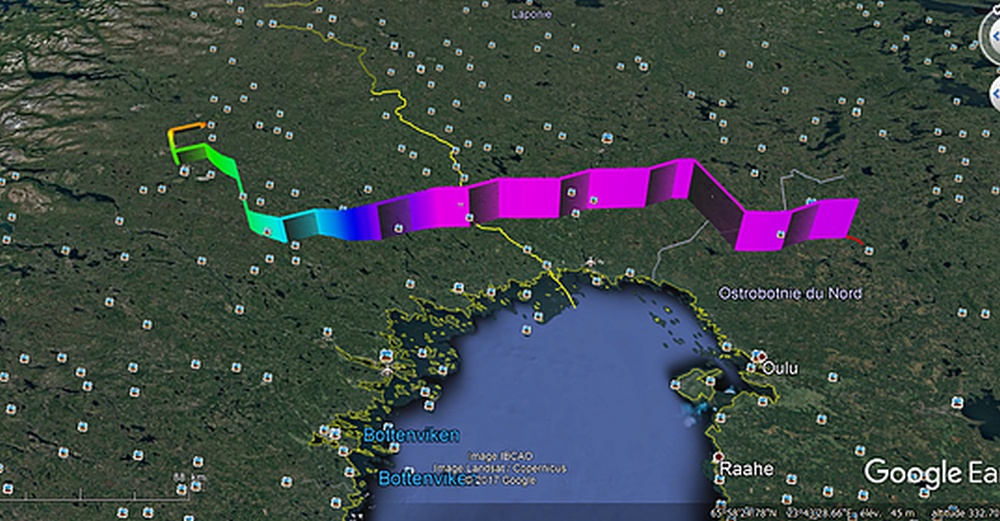 The balloon was launched by dynamic method at 10:26 local time. Enexpectedly the balloon achieved a much slower ascent velocity, requiring over 3.5 hours to reach a float altitude of 25.85 km. After a long flight, but short float, the flight was terminated in Northern Finland.

The experiments that were part of Bexus 25 flight were:

HAMBURG (High Altitude Meteoroids-dust-catching-Balloon constrUcted by a Revolutionary Generation) developed by Technical University of Hamburg, Germany, the goal of the experiment was the gathering and analysing of iron-nickel-containing micrometeoroid, meteorid- and cosmic dust in many atmospheric layers (primary stratosphere) and the creation of a height particle concentration-profile.

IRIS (Infra-Red albedo measurements In Stratosphere) developed by Luleå University of Technology, Sweden was meant to measure the incoming radiation from the Sun and Earth's reflection from snow covered surfaces, vegetation in the Arctic and different types of clouds and also to analyse the spectral signature characteristic of terrestrial vegetation, known as "red edge".

LOTUS-XD (Light power and Optical Transmission experiment of University Students - eXtra Data) developed by TU Dresden, Germany is focused on wireless power transmission which gives the opportunity to provide energy to space devices especially landers and rovers in dark space regions like craters or the polar caps of the moon and mars. LOTUS_XD tested in the BEXUS 24 gondola, in a near space environment, several LaserPower-Converter(LPC) laser pairs to investigate which one was the best for that purpose.

SUNBYTE (Sheffield University Nova Balloon Lifted TElescope) developed at the University of Sheffield, United Kingdom is a project aimed to create a new technique for solar observations by using a high altitude balloon to lift a telescope above the majority of the atmosphere to an altitude of 30-40km. It will have the potential to capture images of much better quality.