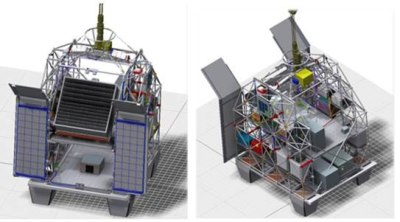 CARMEN is a multipayload stabilized gondola originally introduced in late 2012 by the Nacelles Pointees (Pointed Platforms) CNES team and was developed with several concepts in mind: modularity to allow the inclusion of several instruments devoted to the same or different research areas in one mission, reusability to overcome the difficult to adapt a platform specifically designed around an instrument to another, thus reducing costs and developing times and finally cargo volume which is maximized to allow the installation of many instruments onboard.

At left we can see an scheme of the CARMEN gondola used for the 2017 australian flights.

The design of the outer structure is based on the previous experience of the CNES using similar configurations of strong tubes or bars and balls as anchor point. The overall empty weight of the platform structure is near 275 kg and the space to accomodate the payloads is composed of 4 removable trays, which can support a weight of 100 kg, while the mass occupied by a single payload is of up to 400 kg. In addition, the cells that form the exterior walls of the gondola can also accommodate a total of 400 kg of scientific instruments or services gondolas (telemetry, telecommand and so on).

For the Australian flight, CARMEN hosted on its central bay, a module denominated CASOLBA, which stands for (CAlibration de cellules SOLaires sur vol BAllon). Flown alone since 1975 in many CNES balloons, its a highly sophisticated payload specializing in air mass zero (AM0) calibration of solar cells. Calibrations are performed at high altitudes (above 36 km) where the solar spectral irradiance is very close to AM0. The cells calibrated in this way can subsequently be used as standard solar cell in various laboratory tasks for solar cell characterization by sun simulators.

CNES is the only laboratory in Europe carrying out calibration of this type above the atmosphere. In all 24 cells of different types were sent aloft in CARMEN.

The rest of the payload space was assigned to six Canadian experiments which were able to get onboard thanks to an agreement with the Canadian Space Agency. They were:

ALI V2 (Aerosol Limb Imager Version 2) an atmospheric monitoring tool that can measure the concentration of aerosols in the upper atmosphere using a unique optical device. The instrument, developed by the University of Saskatchewan, is an improved version of the prototype which was flown in a previous balloon mission from Timmins, Canada in 2014, and can detect a wider range of optical wavelengths, allowing it to more precisely measure the size of aerosol particles.

IFPS (Imaging Fabry-Pérot Spectrometer) an instrument aimed to obtain accurate, detailed, simultaneous, and collocated high-resolution measurements of molecular oxygen in the 20~40 km altitude range; and to simultaneously retrieve information on surface pressure, aerosols, and surface albedo from the measurements. Developed cooperativelly by York University and MPB Communications Inc., also is an upgraded version of a similar device flown also during a balloon launch campaign in Kiruna in 2016. This flight will allow the team to test the modifications made to the filter, actuators and optics in order to improve the performance of the imager for future space missions.

OPC (Optical Particle Counters) a suite of three instruments: a Condensation Nuclei Counter and two Optical Particle Counters, one of new design and the other a proven model developed by the University of Wyoming. By sampling the stratospheric air from the balloon platform and by measuring aerosol size and concentration, the final goal is to provide validation of satellite limb scattering observations, to compare the measurements obtained in the same platform by ALI and contribute to the scientific record of in-situ size-resolved stratospheric aerosol measurements to further understanding of volcanic influence and aerosol formation and transport. The package is an effort by the University of Saskatchewan, in collaboration with the University of Colorado and the University of Wyoming, both from the United States.

GPS and Data Logger Breadboard a multi-purpose electronics box aimed to record and provide the location and attitude of the gondola during the entire flight. In addition, the instrument will monitor, through various sensors, the health of other components onboard CARMEN. It includes an onboard storage capacity for telemetry data and two high-definition cameras. The instrument is an improved version of a technology developed by a group of students from École de technologie supérieure, which was successfully tested in 2016 and was later improved by the Canadian Space Agency.

Power Subsystem Breadboard consisting of a set of Li-ion batteries and a power distribution unit. It is CSA development for the STRATOS program to provide the required power to payloads.

RumbleSat Art Package an University of Calgary research project consisting of 64 small works of art. Once the payload returns to Earth, it will begin a cross-Canada tour starting on July 1, 2017, as part of the 150 Artists Celebrating Canada 150: the RumbleSat Art from the Edge of Space Exhibition.

A final experiment named LOAC (Light Optical Aerosol Counter), was also onboard. It was developed by the LPC2E (Physic and Chemistry for environment and Space Laboratory, Orleans, France) and its goal is to determine the concentration and the size of the solid and liquid particles in the air, with sizes from 0.2 to 100 µm.

The balloon was launched using the auxiliary balloon method, on April 9th 2017. After launched, the balloon reached a maximum altitude of 37.3 kilometers and from there, it was valved down to start a slow descent to 31.6 km. Finally the mission was terminated after 12 hours and 33 minutes of flight, and the payload was recovered in good shape North of Tanami road between Hamilton Downs and Milton Park, in Central Australia.