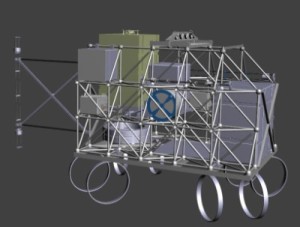 CLIMAT, acronym for Combined Laser and In situ Measurements in the ATmosphere is a multipayload gondola which transports to the stratosphere several scientific experiments but with the same objective: to study concentrations of the main greenhouse species (H2O, CO2 and CH4) and characterize the stratospheric aerosols.

A scheme of CLIMAT can be seen in the image at left. The gondola structure follow the standard conformation of steel bars and balls which CNES engineers mastered over the years, maximizing the space, functionality and versatility which can be adapted to the science needs in each flight. The total mass including instruments is about 240 kgs.

For this flight, the payloads located onboard CLIMAT include several modules of the following instruments:

AMULSE (Atmospheric Measurements by Ultra-Light Spectrometer) for CO2 and CH4 developed by the Groupe de Spectrométrie Moléculaire et Atmosphérique of the Université de Reims. It consist of a compact lightweight spectrometer based on near infrared laser technology at 2.04 µm coupled to a 6-m open-path multipass cell which allows to perform measurements using the Wavelength Modulation Spectroscopy technique. The spectrometer can make in situ measurements of the vertical profiles of the CO2 at high precision levels and with high temporal/spatial resolution.

Pico-SDLA (Spectrométres á Diode Laser Accordables) also to measure CO2, CH4 and water vapour developed by the Division Technique of INSU. The measurement principle of Pico-SDLA is the propagation of a laser wave whose wavelength is centered on an absorption line of the molecule to be detected. The optical path is open to the atmosphere. The measurement of the absorption on the detected optical wave is then inverted to obtain a concentration of the gas.

AirCore samplers composed by a long tube which while descending from high altitude has one end open and the other closed being able to sample and retain a mole fraction profile of a gas to be analyzed after the flight. The samplers were developed by the Atmospheric Radiation Analysis group at the Laboratoire de Météorologie Dynamique

The vast majority of measurements and samplings were taken during the controlled descent of the balloon to avoid contamination of the samples by the balloon itself.

The balloon was launched using the auxiliary balloon method on April 4th, 2017. After released, the balloon ascended during 1 hour and 45 minutes until reaching the planned altitude of 33 km, and once there maintained a stabilized float flight for 40 minutes. Then, following the preliminary plan for the flight, were activated the gas venting valves located at the top of the balloon, which started a controlled descent during 2 hours and 30 minutes to reach 17 km, when the mission was terminated.

After a total flight time of 4 hours and 55 minutes, the payload descended safely near Glen Helen, Northern Territory, 130 kilometers west of Alice Springs.