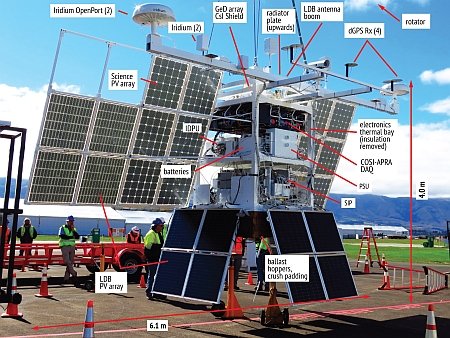 The Compton Spectrometer and Imager (COSI) was a balloon-borne compact Compton telescope designed to study astrophysical sources within the soft gamma-ray energy range (0.2-5 MeV). COSI acts as a spectrometer, wide-field imager, and polarimeter, and had the main goal of studying the Galactic positron annihilation line, imaging the diffuse emission of stellar nuclear lines, and measuring the polarization of compact objects. COSI was the successor of the Nuclear Compton Telescope (NCT), which distinguished itself by being the first compact Compton telescope to image an astrophysical source. COSI was the first instrument specifically designed for NASA's 18 million cubic feet super-pressure balloon: it was light-weight with no consumables, had autonomous observing, and had real time science data telemetry.

At left we can see a picture of the fully assembled gondola with a description of each component (click to enlarge). Basically, COSI consisted of twelve high-purity germanium, cross-strip detectors, where energy deposits and interaction positions of a sequence of Compton scatters allowed for a reconstruction of the incident photon direction. The COSI germanium detectors (GeDs), each measuring 8cm x 8cm x 1.5cm, were designed and developed at Lawrence Berkeley National Laboratory. Twelve detectors were stacked in a 2 x 2 x 3 configuration, acting together to create 3-D position sensitivity with an active volume of 972 cm3. The detector array was housed in an anodized aluminum cryostat and kept at a stable operating temperature of 83 K by a mechanical cryocooler. The temperature of the cryocooler body was stabilized by an active cooling system which dissipated heat via a large copper radiator mounted to the top of the gondola. The cryostat was surrounded on the four sides and bottom by 4 cm thick cesium iodide (CsI) shield detectors which constrained the field of view to 25% of the sky, passively and actively blocked albedo radiation, vetoed high-energy charged particles, and rejected incompletely absorbed events, therefore significantly reducing the background "noise".

The COSI cryostat was located at the top of a three-tier solar-oriented gondola, with the instrument axis fixed towards the zenith. The COSI 2016 gondola measured 1.5m x 1.5m x 2.2m (without the solar panels and antenna booms), weighed 2950 lbs, and was flown with 400 lbs of suspended ballast. To withstand the thermal variations in flight, the top two tiers of the COSI gondola were encased in 1-inch extruded polystyrene foam and a layer of aluminized mylar. COSI was fitted with a fixed solar PV array and batteries with 480 Ah capacity. A rotator provided rough solar pointing to charge the PV arrays. COSI had no pointing requirements, but data from 2 onbard GPS systems and a magnetometer enabled an accurate reconstruction of the location and pointing during flight.

A flight computer, controled the basic operations of the gondola. On-board storage of raw data and housekeeping was done on three redundant 1 TB flash drives. Two Iridium Openport antennas were used to telemeter scientific and housekeeping data in real time.

The SPB is a pumpkin-shaped sealed structure that is filled with a measured and specific amount of helium lifting gas which always maintains a positive internal pressure in relationship to the environment it is floating in. The balloon is filled with an amount of helium needed to lift the entire flight system plus some extra gas to provide an upward force known as the free lift. Once launched, the balloon ascends but unlike occurs with conventional or so called Zero-Pressure (ZP) balloons when it reaches the desired float altitude, the extra helium is not vented off, but fills out the shape and pressurizes the balloon. This extra helium is enough to pressurize the balloon and also to over-pressurize the balloon to the design limits. 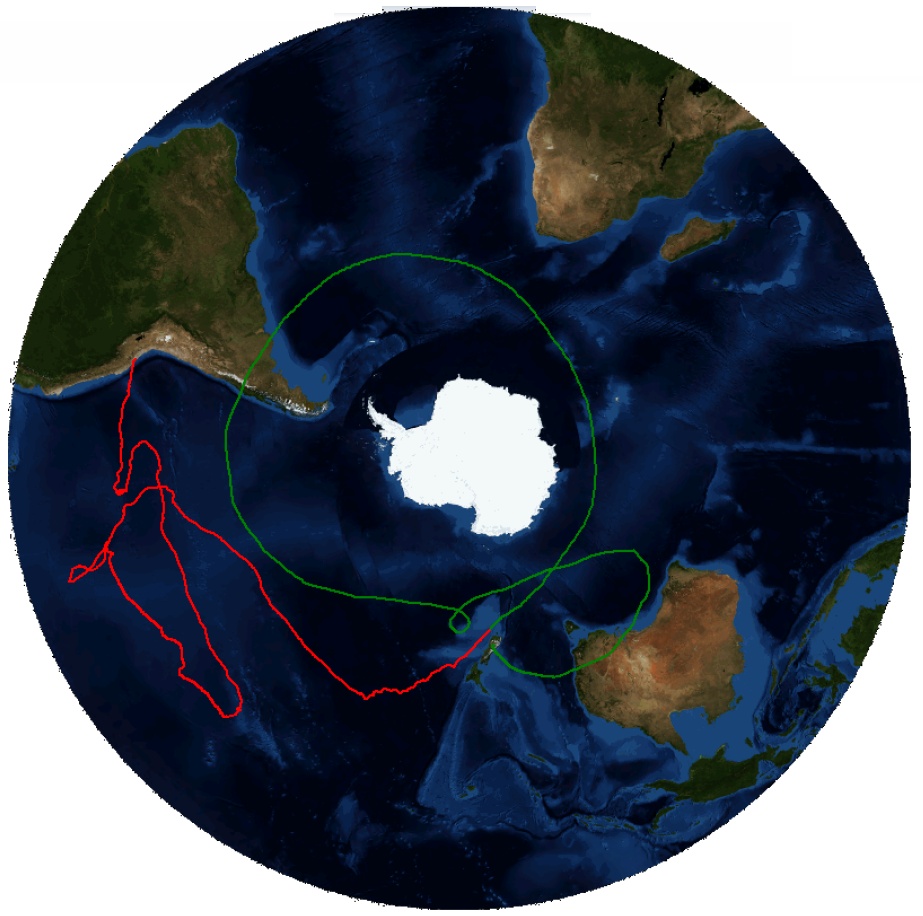 The balloon was launched by dynamic method from Wanaka, New Zealand, at 23:35 utc on May 16th, 2016. Initially after the launch, the balloon floated westwards towards Australia before shifting to lower latitude and heading with the prevailing winds to the east. The balloon achieved a full circumnavigation within 14 days, and then spent much of the remaining flight fairly stagnant above the South Pacific Ocean. Altitude drops during cold nights, concern for the health of the balloon, and the aim to recover it along with the payload, cut the flight short. The mission was terminated at 19:54 utc on July 2, 2016. Payload and balloon landed 200 km north-west of Arequipa, Peru and were recovered on July 14th with no major damage.