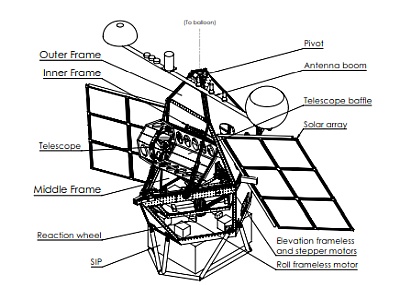 The Super-pressure Balloon-borne Imaging Telescope, also known as SuperBIT, is an astronomical instrument designed to demonstrate the capabilities and performance of high-gain stability, on-demand, wide-field, visible-to-near-UV imaging from the stratosphere hanging from a Super Pressure Balloon (SPB) aimed to perform strong/weak lensing experiments, exo-planetary research, and other cosmological studies. Operating in the visible-to-near-UV bands of the spectrum, made SuperBIT a very unusual balloon-borne telescope which usually operate in the Infrared, Gamma or Submilimeter domains. The last balloon-borne instrument that performed observations in the visible was the infamous and gargantuan Stratoscope-II which flew a dozen of times in the 60's and early 70's.

The instrument houses a 0.5 meter Ritchey-Cretien-type telescope with refractive field correction optics providing a relatively wide 0.5º field-of-view, which is stabilized in all three rotational axes. At left we can see an scheme of the instrument (click to enlarge). Mechanically, SuperBIT is a three-axis stabilizer that compensates for the rough compound pendulative effects that manifest in the balloon-borne environment while compensating for field rotation effects over a relatively wide 0.5º field-of-view. When fully assembled, the SuperBIT instrument is approximately 3 m tall from the base to the flight train connection or pivot and weighs approximately 1000 kg, which is within the weight class suitable for SPB missions. The three mechanical degrees-of-freedom are constructed from a series of nested frames: an outer frame, which controls gondola yaw; a middle frame, which actuates gondola roll about the outer frame; and an inner frame, which controls the telescope pitch about middle frame. Constructed primarily from aluminum honeycomb panels, these three nested frames are both lightweight and structurally stiff, which reduces the potential for the driving of structural modes that can degrade pointing performance and subsequent image quality. While the full 360º yaw range is accessible from altitude, the roll of the middle frame is constrained to ±6º due to inter-frame interference and the pitch of the inner frame is restricted at 20º on the lower end due to the Earth's limb and 55º on the upper end from the angular obstruction caused by the balloon at full expansion.

In order to provide diffraction limited imaging at the telescope focal plane with a 0.02" effective image stability, SuperBIT architecturally refines its pointing precision through three successive pointing and stabilization regimes. Firstly, targets are acquired for accessible regions on the sky by slewing the three gimbal frames to coordinates corresponding to the desired right ascension (RA) and declination (Dec) of the target. Gondola yaw is coarsely achieved via a large reaction wheel, which is driven by a three-phase torque-controlled frameless motor on the base of the outer frame, with inertial and absolute feedback provided by fiber optic rate gyroscopes and a three-axis magnetometer. To prevent reaction wheel saturation due to persistent disturbances, excess angular momentum is dumped through the gondola and along the flight train to the balloon via a speed-controlled two-phase pivot stepper motor, which provides the necessary gondola-external torque by manipulating flight train twist. Along the roll and pitch axes, the middle and inner frames, respectively, are each actuated about their respective frames via pairs of high-inductance three-phase frameless motors equipped with flexure bearings, to prevent non-linear static friction effects, as well as high resolution absolute optical encoders for relative gimbal position feedback. In order to access the full elevation range of the telescope, the pitch axis of the inner frame is co-actuated by a pair of two-phase stepper motors through a high resolution 100:1 gear box, which together coarsely acquires the necessary pitch gimbal position to within < 1'.

After coarse target acquisition, a pair of orthogonal star cameras provide both absolute pointing information through so-called lost-in-space routines using the pattern recognition routines developed for astrometry as well as differential feedback for high bandwidth control telescope stabilization at the sub-arcsecond level through high resolution centroiding. The star cameras can centroid to sub-arcsecond accuracies, and are sensitive to stars of at least Mag 9, which gives on average 4 stars per field of view. Although lost-in-space solutions provide a full pointing solution every 2 seconds, higher rate differential feedback is necessary to mitigate mid-frequency perturbations in the balloon-borne environment. In this differential mode, the star cameras provide star centroiding of the brightest stars in their fields-of-view in order provide frameless motor feedback with the corrections necessary to maintain telescope stability whilst serving as an absolute reference to continually correct for drifting fiber-optic rate gyroscope biases. With the coarse stepper motors locked during fine telescope stabilization, the combination of rate gyroscopes and star cameras provide feedback for frameless motors on all three gimbaled frames to provide the necessary three-axis stability for the telescope.

Once stabilized to < 1", the telescope back-end optics further reduce the focal plane disturbances to 0.02" using a piezo-actuated tip/tilt fold mirror along the optical path of the telescope between the corrective lenses and the science camera CCD. In order to provide feedback for the tip-tilt actuator, a portion of the science focal plane is picked-off and redirected to focal plane star camera that provides high rate differential feedback through sub-pixel centroiding. This centroid information is improved by incorporating rate gyroscope data such that the effective correction bandwidth of the image stabilizer is limited by the inertia of the fold mirror used for tip-tilt corrections as well as the relative power of the piezo-electric controller. Given the potential for thermal misalignments along the telescope bore sight, the focal plane star camera is equipped with an independent linear actuator to decouple its focus control from the telescope secondary focus position. Systematic calibrations between the telescope stabilizing star cameras and the science camera focal plane are determined through similar lost-in-space routines performed on the science camera focal plane. Lastly, in-flight telescope re-alignment is made possible via secondary mirror actuators that provide tip/tilt corrections that correct for potential optical misalignments suffered due to thermal effects or launch shocks. 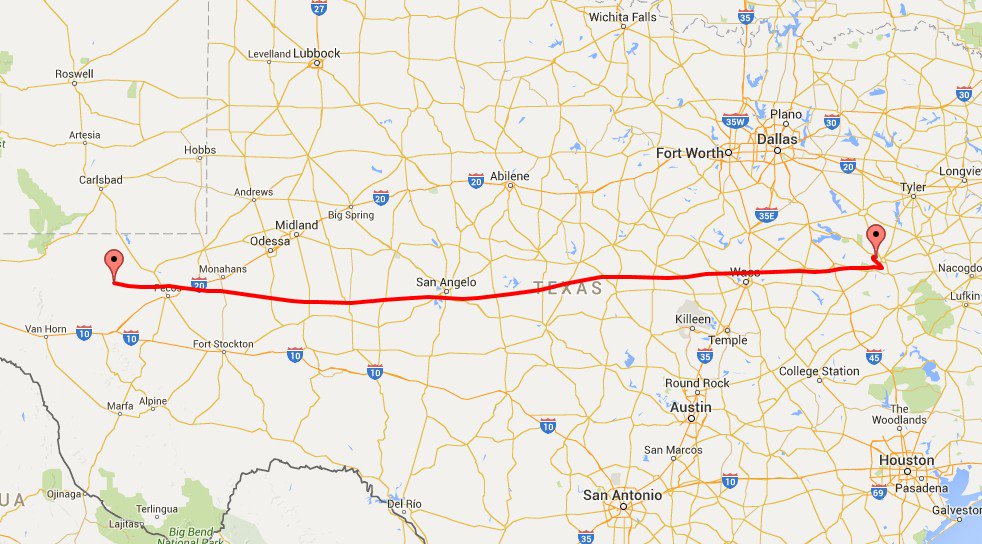 The balloon was launched from the Columbia Scientific Balloon Facility, in Palestine, Texas by dynamic method at 00:30 utc on July 1st, 2016 (June 30th in local time). This launch was the first one performed from the base since 2007. After a nominal ascent phase the balloon reached float altitude of 110.000 feet and started a stright course to the West, crossing Texas overnight. At left can be seen a map of the route followed by the balloon (click to enlarge).

While approaching the Mexican border, at 10:25 utc on July 2, 2016 the mission was terminated. The payload landed West of Pecos, Texas, after a total flight time of 10 hours and 36 minutes.

An unexpected outcome of the flight was the damage sustained by the telescope's optics which were destroyed due to the secondary mirror and baffle fell over the primary.

This was the second engineering flight, following the succesful first mission carried out in 2015 from Timmins, Canada one of the goals of this flight was to demonstrate the ability to operate and calibrate the pointing systems during the flight using communications hardware and protocols similar to what would be used for a Super Pressure flight, which included a suite of line-of-sight and over-the-horizon telemetry and commanding links at various bandwidths.

During flight, a number of targets were successfully acquired to within < 1' pointing accuracy with the ability to automatically and reliably drop and tracking star on the focal plane star camera on-demand for a given target of interest about which the telescope was stabilized.

Despite the reduced beam quality -which revealed the need to remotely realign the telescope post-launch, a capability that has since been implemented post-recovery of the SuperBIT payload in 2016- the flight showed that the capability to obtain sub-arcsecond precision imaging from a balloon-borne payload is not only feasible, but is robust and repeatable despite the harsh dynamic sub-orbital environment.