BACCUS (Boron And Carbon Cosmic rays in the Upper Stratosphere) 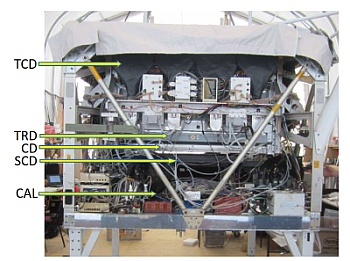 BACCUS, is the acronym for Boron And Carbon Cosmic rays in the Upper Stratosphere, a balloon-borne experiment based on Cosmic Ray Energetics and Mass (CREAM) an instrument developed by the same group which performed six long duration balloon missions in Antarctica, obtaining a total ammount of 161 days of data on cosmic rays. A subset of detectors from CREAM have been upgraded and reassembled for this new payload. That means that from this flight on, BACCUS will continue the research originally performed by his predecessor: to investigate the source, propagation and acceleration mechanism of high-energy cosmic-ray nuclei by directly measuring their energy and charge, focusing on elements ranging from lithium to iron nuclei with energies up to 1015 eV.

The TCD, for trigger and charge measurement, consist of two orthogonal layers of four 5 mm thick plastic scintillator paddles each covering 120 cm x 120 cm. The paddles are read out by fast photomultiplier tubes (PMTs) via twisted-strip adiabatic light guides. The TCD measures the light yield produced by the particle in plastic scintillator. The S3 scintillating square fibers (2 x 2 mm2) are read out by two PMTs and is located just above the calorimeter, and provides a reference time for TCD timing readout.

The CD has a 1 cm thick plastic radiator with 1 m2 surface area and is instrumented with eight PMTs viewing wavelength shifting bars placed along the radiator edges. It is used to flag relativistic particles to provide a charge determination complementary to that of the TCD. The CD responds only to particles with velocity exceeding the velocity of light in the plastic, allowing BACCUS to reject the abundant low energy cosmic rays present in the polar region.

The TRD, for energy measurement, is new for the BACCUS flight, compared to the CREAM-I TRD. The 1200 mm long thin-walled gas proportional straw tubes, of 10 mm diameter, are filled with Xe/Co2 80/20% gas mixture at 1 atmosphere. The TRD consists of 8 modules (organized in two sections) with alternating orthogonal straw orientations. Each module contains 200 straw tubes arranged in dense double layers and a TR radiator made of 50 mm thick plastic foam material. The High Voltage (HV) modules are placed inside the light aluminium gas manifolds to avoid exposure to the low pressure environment at float altitude.

The SCD, for charge measurement, is composed of two layers of 156 silicon sensors each with thickness 380 µm, segmented into an array of 4 x 4 pixels, each with an active area of 2.12 cm2. The sensors are slightly tilted and overlap each other in both lateral directions, providing a full coverage in a single layer and covering an area of 77.9 x 79.5 cm2. The dual layers, about 4 cm apart, cover an effective inner area of 0.52 m2 with no insensitive regions. The readout electronics of the 4992 pixels is based on a 16-channel ASIC chip followed by 16-bit analog-to-digital converters (ADCs), providing a fine charge resolution over a wide dynamic range from hydrogen to nickel.

The CAL, for trigger and energy measurement is located at the bottom of the structure and is composed by a stack of 20 tungsten plates, each 1 radiation length (X0) thick and with a surface area 50 x 50 cm2, interleaved with layers of 1 cm wide and 50 cm long scintillating-fiber ribbons. Each ribbon is built by gluing together 19 scintillating fibers of 0.5 mm diameter each. The light signal from each ribbon is collected by means of an acrylic light mixer coupled to a bundle of 48 clear fibers where each fiber is distributed to low, mid, and high range channels. A total of 2560 channels are read out from 40 Hybrid Photodiodes (HPDs) powered in groups of 5 units. The use of both TRD and CAL instruments allows in-flight cross-calibration of the two techniques and, consequently, provides a powerful method for measuring cosmic-ray energies.

All these elements along with CSBF telemetry and telecommand modules and onboard power systems are located in a square gondola specially built to protect the elements at landing thus at the same time allowing a fast dissasembling for post flight recovery. 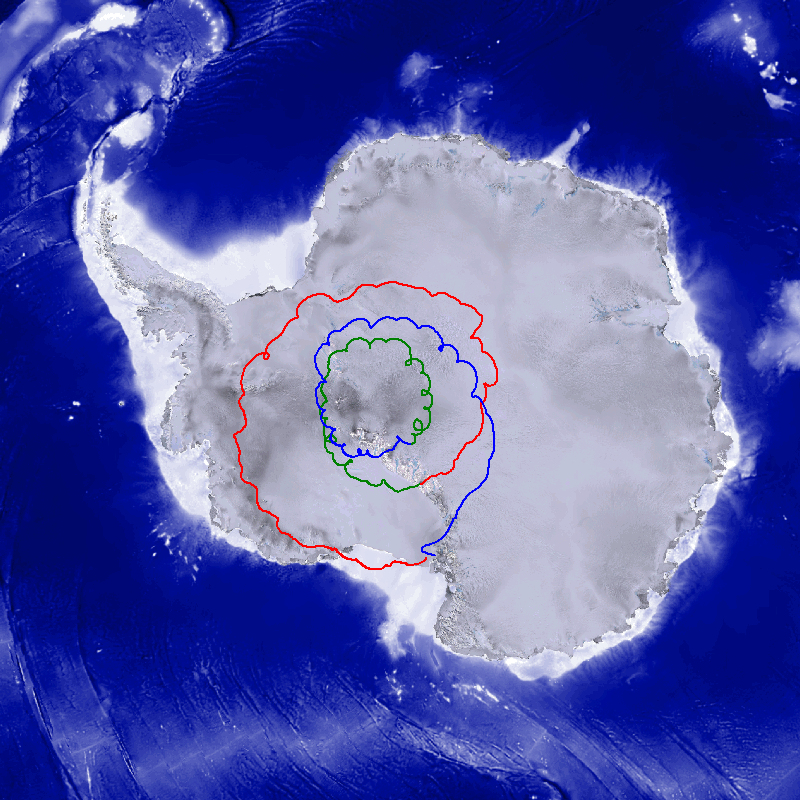 The balloon was launched by dynamic method on November 28 2016 at 19:15 utc, being nomenclated as mission 674N. Since the inception of the polar NASA program inception in 1992, BACCUS is the first mission taking part of an Antarctic campaign launched as early as November. After an initial ascent phase the balloon reached float altitude of 129.000 ft at 23:40 utc and started to move in the typical anti-clockwise pattern around the pole.

After completing three full circles to the continent the mission was terminated on December 28, 2016. At left we can see a map of the route followed by BACCUS showing the 1st turn in blue, 2nd in green and the last one in red (click to enlarge). The balloon was separated from its payload around 20:15 utc, for a total flight time was 30 days, 2 hours and 1 minute. Thanks to the casual broadening of the route followed by the balloon during its third turn, BACCUS landed just 50 nautical miles east of McMurdo. In terms of the Antarctic distances and the complexity of the task of rescue an experiment of this type in the white continent, it's like BACCUS landed in the base's backyard.