The main objective of the flight was to perform a series of atmospheric measurements using an Aethalometer operated by the Space Physics Laboratory - Vikram Sarabhai Space Center (SPL-VSSC). The athelometer is an air sampling instrument and employs optical attenuation method to measure the black carbon (BC) concentration in the sampled air by deposition on a special type of filter tape. The air sampling capacity of the instrument is augmented by using high capacity external pump to operate at high altitudes where air density is very thin. The data acquisition and telemetry interface unit acquires the Aethalometer data and GPS data simultaneously, converts the same into parallel format and feeds to onboard telemetry system for online reception at the ground station. It also measures the various housekeeping parameters such as internal temperature, pressure, voltage levels of subsystems etc. for real time monitoring and control. An onboard data storage unit is used to back up the entire data during the experiment on a MicroSD card in a file. A telecommand switch unit is used to turn ON and OFF the payload based on the Telecommand sent from the ground station in order to schedule the operation of the payload. This helps to operate the instrument only during the usable altitude range and switch OFF during the rest of the time so that considerable amount of battery power can be saved.

Complementary to the main experiment were included also in the gondola, several instruments developed by the Tata Institute of Fundamental Research (TIFR) balloon facility including a Quartz Crystal Microbalance and a Inertial Measurement Unit (IMU) to observe 3-axis motion of a balloon payload over a flight time of ~ 4.5 hours, from launch to the float altitude of 31.2 km. This measurements are part of efforts to characterize disturbances that could be affect the operation of a new balloon-borne pointing system being developed by the Indian Institute of Astrophysics. 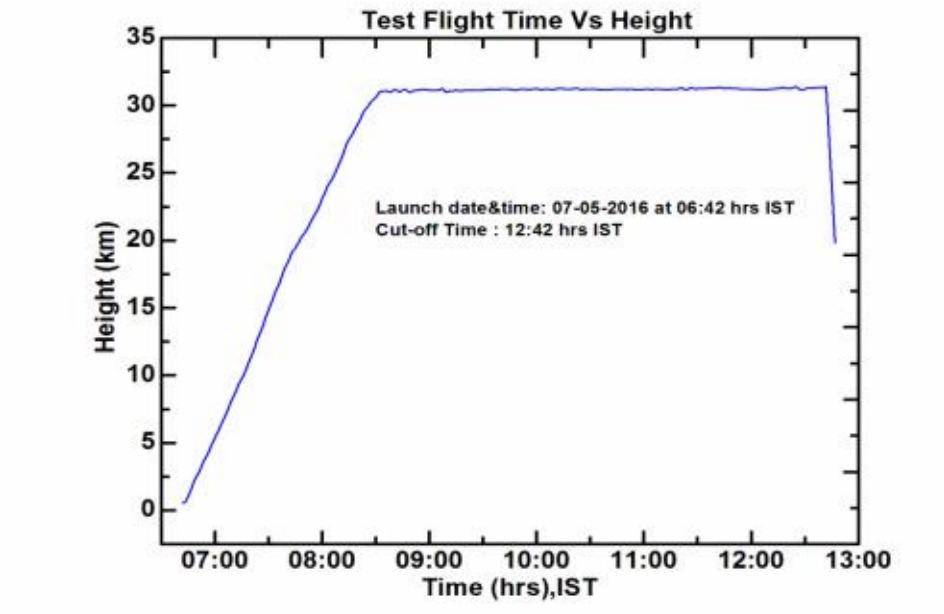 The initial launch was proposed to be conducted before sunrise on May 6th 2016, however, weather conditions deteriorated rapidly and delayed the launch till the next day. The balloon was successfully launched from the National Balloon Facility in Hyderabad on 7th May 2016 at 6:42 hrs India Standard Time (IST). It reached desired ceiling altitude of 32 km at 8:36 IST after an ascent time of 1 hour and 53 minutes at an average rate speed of 4.59 meters per second.

After completing the mission the flight was terminated by the onboard programmable timer at 12:42 IST and the payload was recovered the same day in good condition 380 km West of Hyderabad.