Balloon launched on 9/21/2015, from Timmins Stratospheric Balloon Base, Ontario, Canada 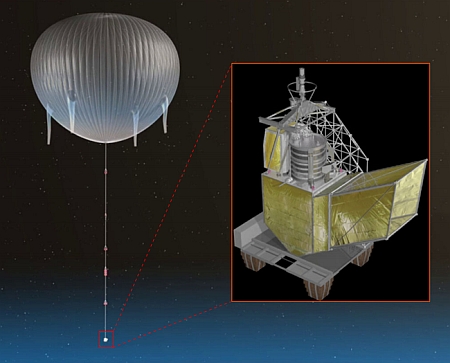 The balloon was launched by auxiliary balloon method from Timmins Stratospheric Balloon base in Ontario Canada on September 21, 2015 at 9:00 PM local time. The ascent to the float altitude took 2.5 hr. At ceiling, the altitude of the experiment remained relatively stable between 38 km and 39 km over a time period of 18 hr.

The experiment successfully landed under parachute and was recovered about 350 km east of Timmins in a dry forest area. It suffered some damage, essentially to its electrical harness and optical baffle, due to collisions with trees and branches, but the science payload was successfully protected by the mechanical structure of the gondola.

This was the first flight of the PILOT experiment. The total duration of the flight was 24 hr allowing to obtain about 15 hr of science data. Approximately 4 hr were spent optimizing the detector readout chain settings, recycling of the 3 He fridge and slewing between individual observing regions. The focal plane temperature remained stable during the whole ceiling period. Out of the eight bolometer arrays, array #1 and #3 were not operational during flight due to an electrical short circuit affecting the clock signal used for the time-domain multiplexing of the arrays, a problem which was already encountered during ground calibrations.

During this flight, scientific observations were performed scanning the telescope at constant elevation, in order to minimize residual atmospheric emission. was collected a total of 5.5 hr of science data on star-forming regions, 2.4 hr on cold cores, 1.4 hr on external galaxies, and 4.6 hr on a region of the sky with low brightness. Calibration data were obtained on the planets Uranus and Saturn. Also were obtained "skydip" measurements, during which were explored the whole range of allowed elevations, in order to characterize the residual atmospheric emission.