Balloon launched on 8/27/2015, from Timmins Stratospheric Balloon Base, Ontario, Canada 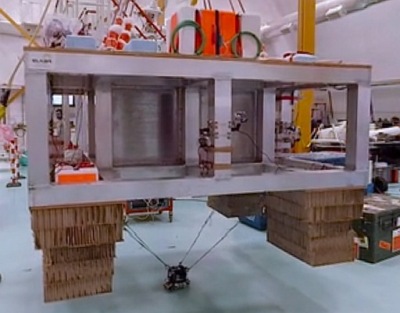 The objective of the flight was to test a new parachute for heavy payloads and general behaviour of the flight system with a simulated load similar to the one to be carried by PILOT, a balloon-borne telescope to be launched later in the same campaign.

The 100 ft diameter parachute provided by raven-Aerostar had to be tested in real conditions. To be fully realistic CNES has build the GOLD gondola which is the acronym of Gueuse Opérationnelle à Lest Dimensionnable (Operational Gondola with Adjustable Ballast). The platform measures 2.05 m x 1.85 m x 0.75 m, with a dry mass of 350 kg and is composed by large beams that forms a rectangular structure and a central compartment where can be stored more than 700 kg of ballast. At left we can see an image of the GOLD gondola before flight.

The gondola was fully instrumented with the objective of collecting the maximum amount possible of flight parameters. That included cameras, accelerometers and various sensors. An special addition was a 360º high definition camera that was installed under the gondola which was provided by Deep Inc. an startup from Toronto in collaboration with Koncept VR. The special camera registered the entire flight of GOLD and as a result, Emmy Award-winning filmmaker and founder of DEEP Inc., Thomas Wallner and Joergen Geerdsa CEO of Koncept VR produced a short documentary called ''Edge of Space". The piece -which can be seen in the frame below these lines- was commissioned by cultural television channel ARTE, from France.

A secondary objective of the flight was also to test a new model of auxiliary balloon used to elevate the gondola during the launch procedure. The new design was introduced after an incident that occured in the last flight of the previous campaign (Stratoscience 2014) on which the auxiliary balloon instead of self-destructing, continued flight crossing the US border for a final landing in the Ilesboro Island in Maine.

Documentary produced with footage from the flight