SPIDER (Suborbital Polarimeter for Inflation Dust and the Epoch of Reionization) 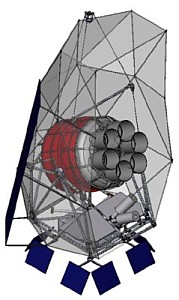 Spider is a balloon-borne experiment designed to search for primordial gravity waves imprinted on the cosmic microwave background (CMB). Measuring the strength of this signal puts limits on inflationary theory.

The Spider instrument (shown in figure at left) consists of six degree-resolution independent monochromatic telescopes cooled to liquid Helium temperature (4 degrees Kelvin). The telescopes which observe at frequencies of 100 GHz, 150 GHz, and 220 GHz (corresponding to wavelengths of 3 mm, 2 mm, and 1.4 mm) are coupled to a polarisation-sensitive transition-edge bolometer array cooled to 250 mK. Each telescope is housed in a single long hold time cryostat and is fully baffled from radiation from the ground and balloon by a lightway stratucture made of thin-foil. The gondola permits the instrument to scan in azimuth with a reaction wheel and a motorized pivot. The cryostat, mounted on bearings, can be adjusted in elevation.

Solar arrays provide power for the instrument and onboard instrumentation. 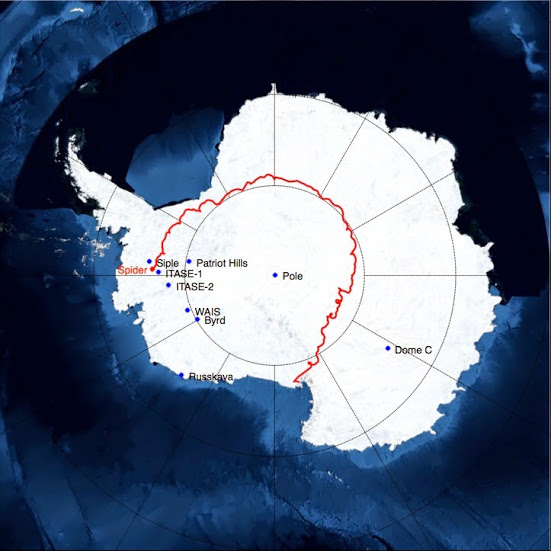 SPIDER was launched by dynamic method on January 1, 2015, from the NASA/NSF Long-Duration Balloon (LDB) facility near McMurdo Station, Antarctica. All payload systems performed well throughout the flight, with the exception of a differential GPS unit failure that had no significant impact on flight operations or pointing reconstruction. SPIDER's flight lasted 16.5 days at an average altitude of 35 km. The flight was terminated when cryogens were exhausted and the circumpolar wind system began to fail. The payload touched down in a remote region of Ellsworth Land of West Antarctica. Data drives and key flight hardware were recovered in February by personnel from the British Antarctic Survey; a second team recovered the remainder of the instrument in November.