Balloon launched on 9/19/2014, from Timmins Stratospheric Balloon Base, Ontario, Canada 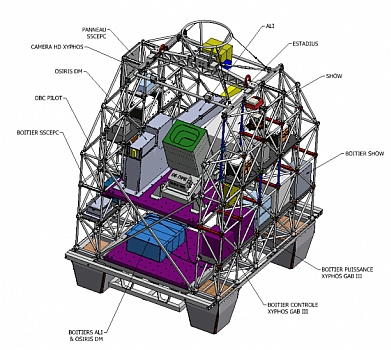 CARMEN is a multi-payload platform developed by the French Space Agency CNES, following the modular principle. CARMEN was born with several concepts in mind: modularity to allow the inclusion of several instruments devoted to the same or different research areas in one mission, reusability to overcome the difficult to adapt a platform specifically designed around an instrument to another, thus reducing costs and developing times and finally cargo volume which is maximized to allow the installation of many instruments onboard.

During this first scientific mission the gondola transported experiments from Canada and France.

The instruments provided by the French side were mainly two: ESTADIUS a daytime stellar sensor, proposed by CNES and the Electronics Module of the PILOT astrophysical experiment developed by the Institut de Recherche en Astrophysique et Planétologie (IRAP). In turn, the Canadian aportation for the flight were SSCEPC (Single Solar Cell Electrical Power Converter) developed by DPL Science Inc; Xiphos Q7 ATM-III a miniaturized data-processing technology to be qualified for future space use developed by Xiphos Systems Corp; SHOW (Spatial Heterodyne Observation of Water) developed by the York University along with ABB Ltd. and the University of Saskatchewan and finally ALI (Aerosol Limb Imager) and OSIRIS-DM (Optical Spectrograph and InfraRed Imager System Development Model) both developed by the University of Saskatchewan.

The denomination CARMEN-2 came from the fact that during the qualification phase of the NOSYCA system in the Timmins campaign in 2013, the original CARMEN payload suffered a rather violent landing from which was not recovered, so it was neccesary to built another unit from the scratch.

During this mission one auxiliary balloon used to elevate the gondola during the launch procedure, experiment a serious failure on its release hook. Apparently the device was blocked by ice, and instead of deflating once released from the gondola during ascent it remined inflight, travelling more than 1000 km alone, crossing the US border for a final landing in the Ilesboro Island in Maine. After this incident, the auxiliary balloon release system was improved and modified for the next campaign in 2015.