Balloon launched on 8/24/2014, from Timmins Stratospheric Balloon Base, Ontario, Canada EUSO-balloon is an exploratory mission of JEM-EUSO, a future space telescope to be installed in 2017 in the Japanese Experiment Module of the International Space Station. The purpose of JEM-EUSO is to identify the astrophysical nature and origin of Ultra-High Energy Cosmic Rays (UHECR). These are the most energetic particles known in the universe, reaching energies near 1020 eV (60 Joules), whose origin is still uncertain. The method to be used for detecting these particles is to observe the trail of fluorescence denominated Extensive Air Showers (EAS) which is left when the cosmic rays collide with other particles in earth's atmosphere. JEM-EUSO is a multinational project involving more than 340 scientists from 86 institutes of 16 different countries. The EUSO-Balloon mission has been proposed in 2011 to the French Space Agency CNES by the three French laboratories (APC, IRAP and LAL) involved in the international JEM-EUSO collaboration.

The EUSO-balloon gondola is shown in the scheme above left, its main components are the optical bench -red cube below- and the instrument booth -located inside the white octogonal floater above-.

The particular configuration of the nadir pointing instrument allowed to design a simple telescope structure serving simultaneously as a ballon gondola. The structure consists of two main modules, as shown in the scheme above left: the optical bench -red cube below- and the instrument booth -located inside the white octogonal floater above-.

The optical bench and the instrument booth both were built from 10 mm Fibrelam aerospace panels assembled by Fribrolux L profiles. Fibrelam panels are light-weight, structurally sound and exceptionally stiff. The dimensions of the fibrelam-telescope itself are 1.21 x 1.21 x 2.90 m3.

The heart of the instrument consists of two 1 m2 sized Fresnel lenses and a focal surface filled with 36 Multi-Anode Photomultipier Tubes (MAPMT) forming 9 Elementary Cell units (EC unit), each of which consist of 4 MAPMTs with three layers of PCB, and front-end electronics.

The two Fresnel lenses and their mechanical supports are fixed within the optical bench so that the focal surface coincides with the photocathodes of the Photo-Detector Module. While the rear Fresnel lens (L3) is fixed, closing the watertight instrument booth, the front lens (L1) can be adjusted along the optical (Z) axis; the PDM is mounted on a translation stage, allowing to adjust the distance between PDM and rear lens (L3).

The UV data was complemented by infrared (IR) images taken by a stand-alone bi-spectral IR camera located in the exterior of the gondola.

The entire gondola has been designed to withstand accelerations of up to 15 g along the Z-axis, and 5 g in transverse (X,Y) directions. Instead of "classic" crash-pads made of layered cardboard-honeycomb, EUSO-Balloon made use of an ensemble of aluminium "crash-rings", designed to absorb the kinetic energy on ground impact through inelastic distortion. Due to the coincidence of a science requirement and a safety constraint, EUSO-Balloon has deliberately been designed to protect all sensitive equipment in the event of a water-landing. Inside the self-contained, watertight instrument booth, all electronic equipment is mounted on a system of aluminum "shelves" that provides a thermal link to the 1.2 x 1.2 m2 aluminum backplate (also called radiator). Besides its role as a structural element, the role of the radiator is to evacuate the excess energy generated by the electronics towards outer space. 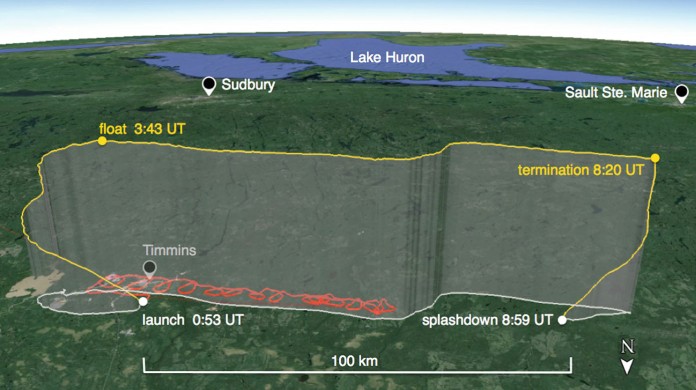 The first launch attempt was initially planned for the evening of August 23. The scientific team was anxious to take the first launch opportunity as the next days showed a considerable deterioration of the weather, which was a constant since the begining of the campaign. First complication arose during the afternoon with the discovery of a defective iridium modem in the back-up chain of the CNES communication system. However, the problem was fixed and the preparations continued, but then, when the payload was ready to be taken to the launch field, the CNES team found that a battery of the Nacelle Envelope (which helps to track and locate the balloon after separation from the payload) was depleted. With no spare at hand, it was decided to move the launch to the next day. In the afternoon of August 24, the pre-launch sequence commenced again but this time all functioned perfectly, and while the last rays of the fading sun illuminated the scene at the Victor M. Power airport, the EUSO-Balloon gondola was transported to the launch pad, and attached to the two tetrahedral auxiliary balloons that would hold the payload at launch. A few minutes later the inflation of the main balloon started, and at 20:54 local time (corresponding to 00:54 on August 25 according to UTC time) it was launched. The ascent phase was completed flawlessly and soon balloon and payload were floating 40 km above Ontario.

As soon as the balloon was launched, part of the scientific team of the project departed from the base onboard an helicopter equipped to perform an important task during the flight: to follow the balloon from below first firing it with an up-looking specially calibrated UV flash lamp, and later shooting several pulsed laser beams across the field of view of the instrument, to see if the light scattered out of the beam to the detector. Meanwhile in the Timmins base, the rest of the team was enjoying the images of the "first light" seen by the instrument as it was flying over Timmins.

As the night passed and the scientific objectives were acomplished, it was time for CNES to seek a good place to land the payload. During the entire trip, the balloon moved near 100 kms to the west of the launch base, to the Algoma district. After selecting an adecquate site to land the separation command was transmitted at 4:20 local time on August 25 (8:20 utc) and the payload started it's way down. Due to the different directions and speed of the wind encountered in different layers during the descent, instead of landing on the ground, EUSO came to rest in the middle of a small unnamed lake located 20 km NE of the small community of Elsas.

Next day three members of the EUSO team along with staff of the Canadian Space Agency and guides well acquainted with the zone were deployed to the area of the landing. Once there, the instrument was extracted from the lake by the recovery helicopter and deposited in a nearby road, where it was examinated by the scientists whom found it in perfect shape and dry, even the portion of the instrument that was under the water. That same day where also recovered the balloon envelope and the operative gondola which landed in dry soil.