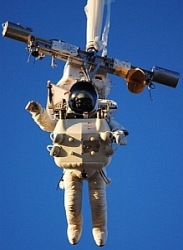 StratEx is short for Stratospheric Explorer. The StratEx program goal was to develop a self-contained spacesuit and recovery system that would allow manned exploration of the stratosphere above 100,000 feet. Such a system has wide-ranging applications for; the study of the science of the stratosphere, development of means for spaceship crew egress, the study of dynamics of bodies at Mach 1, new high altitude aircraft suits, and setting of records for space diving, sailplaning and ballooning. StratEx flew using a scientific balloon, and is capable of being used with different kinds of vehicles other than balloons, such as stratospheric aircraft.

The flight was piloted by Robert Alan Eustace, Senior Vice President of Knowledge at Google Inc. where he is responsible for the Research organization. He also was a pilot for 25 years, and an avid skydiver.

Paragon Space Development was the prime contractor for StratEx. They have worked with Alan to develop the design, build the life support system, manage the system development, and conduct operations.

This was the third and last flight of the program and established several official records: Exit Altitude 41.422 meters beating the previous record of 38.969 meters set by Felix Baumgartner during the Red Bull Stratos program in 2012; distance fall with drogue device of 37.623 m and vertical speed with drogue device of 1320 km/h. For these two late items there was no previous record set.