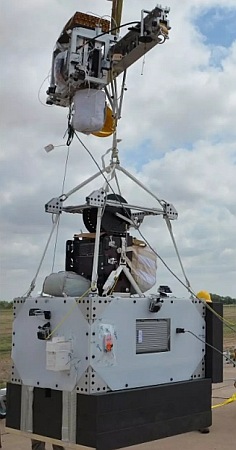 The TYCHO STRATOCRAFT was a specially built modular platform developed by World View capable of being customized for a wide variety of unique mission needs and payloads including its own subsystems for telemetry, payload control, power and thermal control. It was named after the Danish astronomer Tycho Brahe (1546-1601). As Brahe was the source of data used by others to make powerful discoveries, Tycho stratocraft was aimed to provide researchers with stratospheric access to make new discoveries.

There were three standard versions of the Tycho platforms for specific payload mass ranges: Tycho800, Tycho285 and Tycho20, where the number denotes the number of kilos that each of them can lift as payload. The systems that composed the TYCHO platform shared heritage with those used by StratEx for the record setting manned balloon flights performed in October 2014. The platforms were abandoned when the main focus of the company was shifted to missions onboard Stratollites.

Tycho285 was a stratocraft configuration for payloads upto 200 kg. It consisted of a Balloon Equipment Module (BEM) which housed an avionics suite comprised of flight computer, a flight transponder, video cameras, ground and satellite-based data communication, GPS and flight batteries capable of a 17 hour flight time. The platform also counted with a payload release interface (PRI), an aerodynamic descent system (ADS) formed by a steerable parafoil and could be configured with or without a Payload Support Module (PSM).

The standard PSM was a framework assembled with aluminum extrusions with angle brackets to form an open faced, frame-cubed structure offering approximately 1 m3 of internal volume. If a payload was too large to be mounted inside the PSM, or was heavier than 200 kg, and/or was an atmospheric descent system, it was mounted directly to the Payload Release Interface via the Aerodynamic Descent System as long as the experiment does not exceeded 2.5 m in height.

The platform counted with an UART serial interface to payload provider's telemetry and command functions and could be outfitted with GoPro cameras to record flight video. Aditionally, Tycho285 could be outfitted with a video downlink capability to payload providers. Power was obtained from onboard batteries which provided voltages of 3.3, 5, 15 or 24 VDC and up to 20 amperes. The stratocraft used a 902-928 MHz, frequency hopping, 1 watt output power, spread spectrum modem to communicate telemetry and commands at up to 1200 bps up to a distance of 160 miles. This system was used also for information and data to and from the platform during the flight.

The balloon was launched from the Roswell International Air Center in Roswell, NM on June 18 at 7:45 a.m. MT. After a nominal ascent phase, the balloon reached 120,000 feet and remained there for five hours.

The test flight, which also was the maiden flight for the TYCHO platform, represented a milestone accomplishment as World View has successfully completed a scaled test flight of its high-altitude balloon spaceflight system breaking the world record for highest parafoil flight in the process. The test validated the full flight profile of the spaceflight system, lifting a 10 percent scale system to 120,000 feet.

The flight tested several essential components and captured imagery of the view that will be offered to potential costumers of tourist flights in the future. Focus of the mission was on four main areas:

Launch and Ground Operations. After months of development and planning, the crew set out to validate the pre-, during and post-flight ground systems, protocols and operations (including the method to be used in manned capsule flights).

Redundant Landing System. The flight validated the deployment process of a backup safety parafoil (which was stowed in the top of the vehicle), successfully validating one of the redundant systems of the spaceflight.

Parafoil Aerodynamics. Setting the record for the highest parafoil flight ever conducted, the vehicle rose to an altitude of approximately 120,000 feet and back down to 50,000 feet where a parafoil was deployed to capture data characterizing the aerodynamic behavior of a parafoil flying from the stratosphere. Parafoils routinely fly around 30,000 feet but have never been flown at the altitudes achieved by this World View test flight.

Precision Guided Landing. The guidance system that enables the vehicle to make a precision landing and safely return the vehicle to Earth was also tested and performed as expected. The system was previously tested at lower altitudes at Yuma Proving Ground.