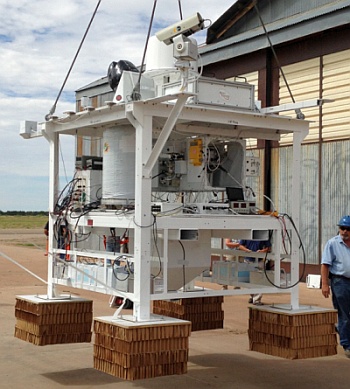 The objective of the flight was to test several technical devices and systems related to long duration balloon missions specially a High Gain Telemetry Tracking Antenna, developed by De Vries Scientific. These elements were installed in a square two deck technological gondola. A picture in detail of the components can be seen in the picture at left (click to enlarge).

E-MIST (Exposing Microorganisms in the Stratosphere) developed by NASA's Kennedy Space Center (KSC), aimed to understand how spore-forming bacteria, commonly-found in spacecraft assembly facilities, can survive in a harsh space-like environment. E-MIST was contained in a special carrier that was conceived and built at KSC's Prototype Development Laboratory. The 80-pound structure featured four doors that rotated to expose up to 10 experimental samples each for a predetermined period of time. The structure -which can be seen in the last image at lower right- also had a control board for autonomous operations and customizable avionics, power, environmental controls and sensors.

SolCompT (Solar Compton Telescope) developed at the Space Science Center, University of New Hampshire, a test concept for an advanced Compton telescope making use of modern scintillator materials with silicon photomultiplier (SiPM) readouts. The prototype was a simple two-element Compton telescope, consisting of an approximately one-inch cylindrical stilbene crystal for a scattering detector and a one-inch cubic LaBr3:Ce crystal for a calorimeter detector. Both scintillator detectors were read out by 2 x 2 arrays of Hamamatsu S11828-3344 MPPC devices. It was contained in a pressurized cylinder located in the lower deck of the gondola and is clearly visible in the image at left. The objective of the test was to demonstrate stable performance of this technology under balloon-flight conditions. 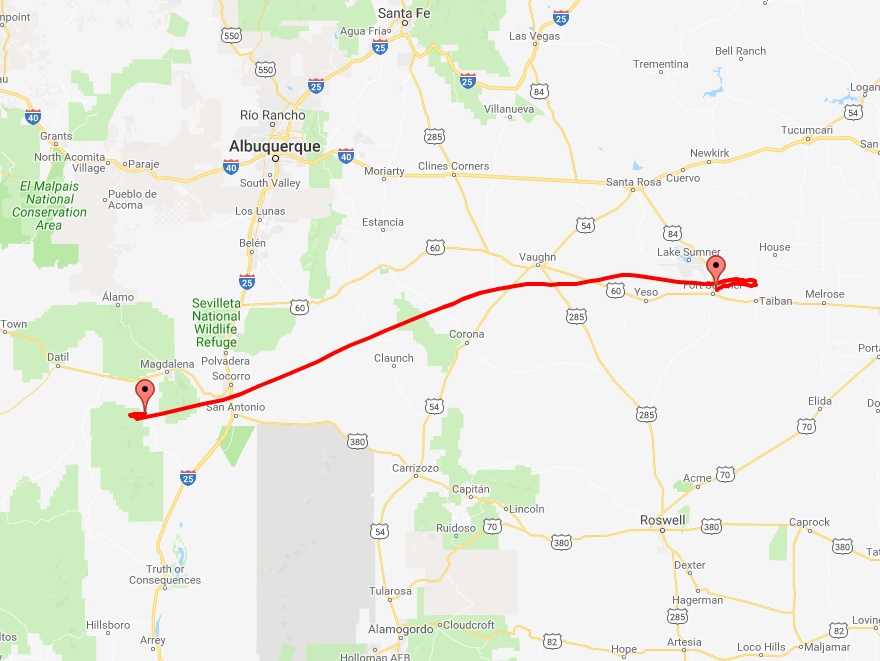 The balloon was launched at 13:55 utc by dynamic method and after ascending flawlesly and slowly during the next 2 hours and a half, it reached it's float altitude of 123.000 ft at 16:23 utc. It moved in a southwest course at an average speed of 40 knots/hour during most of the flight. At 19:42 utc it crossed over the Rio Grande just south of the city of Socorro, and 20 minutes later the payload was separated from the balloon minutes before 20:00 utc.

The impressive landing calculation made by CSBF led the payload to rest in the valley just between Mt. Wittington and South Baldy mountain in Socorro County. Total flight time was short -6 hours and 38 minutes- due to the desire of CSBF personnel to keep the payload nearby for easy retrieval, once the test of LDB equipment was completed.