Balloon launched on 9/14/2013, from Timmins Stratospheric Balloon Base, Ontario, Canada 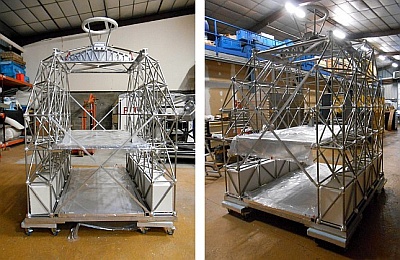 This flight was part of the 2013 qualification campaign meant to test and validate the NOSYCA (New Operational SYstem for the Control of Aerostat) flight system. For this mission was used a stabilized platform developed by CNES called CARMEN. At left we can see an scheme of it. The design of the outer structure is based on the previous experience of the CNES using similar configurations of strong tubes or bars and balls as anchor point. The overall empty weight of the platform structure is near 275 kg and the space to accomodate the payloads is composed of 4 removable trays, which can support a weight of 100 kg, while the mass occupied by a single payload is of up to 400 kg. In addition, the cells that form the exterior walls of the gondola can also accommodate a total of 400 kg of scientific instruments or services gondolas (telemetry, telecommand, etc).

NOSYCA is a system designed starting in 2007 after CNES faced the double constraint of having to upgrade an ageing control system and having to comply with new, more stringent flight safety rules. To guarantee the protection of the overflown population, all critical functions of the new design had to be failsafe, i.e. nor single point failure, nor failure propagation would be allowed from the flight hardware to the ground control system. The Operational Gondola (OG) is therefore composed of two independent strings. Their architectures are different and the ballast reservoir acts as a physical barrier between the two. The primary string communicates with the ground segment through an S-Band antenna providing telemetry with a bit rate of 1.75 Mb/s and telecommand with a bit rate of 95 kb/s. The secondary string provides a link at a lower bit rate through the Iridium constellation. The system is IP based and provides a wireless link to the payload gondola located at the bottom of the flight chain approximately 100 meters (330 ft.) below, isolating from the payload all critical functions related to the piloting: gas and ballast jettison, end-of-flight command, etc. A single unit is required to be installed onboard the payload gondola to interface with the CNES wireless signal, using a few switches and a router that has been configured to talk with the Operational Gondola. Finally, the Envelope Gondola (EG) also contains critical functions: it is dedicated to the balloon envelope and provides critical functions to this segment after separation from the payload i.e. radar transponder, strobe light and localization through redundant GPS systems.

In this particular flight two small Canadian payloads were accepted to be part of the mission on a no interference basis only. Time of launch and flight profile were selected based on qualification scenario and the full bandwith of the communication system was dedicated to the tests being performed on the NOSYCA system. The two payloads flown were a generic-power subsystem that could potentially be used in subsequent balloon campaigns and onboard satellites developed by DPL Science Inc. and a new miniaturized data-processing card technology for use in future space missions developed by Xiphos.