Balloon launched on 12/5/2013, from Naval Air Station Tillamook, Oregon, US 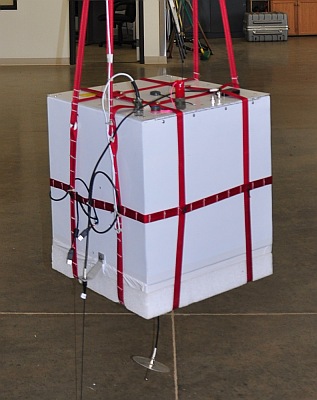 Automatic Dependent Surveillance-Broadcast (ADS-B) is a surveillance technology for tracking aircraft as part of the Next Generation Air Transportation System. ADS-B enhances safety by making an aircraft visible, real-time, to Air Traffic Control (ATC) and to other appropriately equipped ADS-B aircraft with position and velocity data transmitted every second. The United States will require the majority of aircraft operating within its airspace to be equipped with some form of ADS-B Out by January 1, 2020.

The international aviation community is also currently migrating to ADS-B. One current limitation to the worldwide implementation of ADS-B is a lack of ground stations (and hence position broadcasts to other aircraft) over large transoceanic and polar areas that are critical to the commercial aviation marketplace. To incorporate these areas under the ADS-B "umbrella", there are plans to include ADS-B nodes on future satellite platforms, including both Iridium and GobalStar next generation satellites.

To test the efficacy of overhead collection as it applies to the ADS-B architecture, Near Space Corporation (NSC) and CNS Aviation Services therefore partnered under NASA's Flight Opportunities Program to fly a surrogate satellite ADS-B system at high altitude to evaluate overhead reception of both Universal Access Transceiver (UAT; 978 MHz) and 1090 Extended Squitter (ES) ADS-B signals from operational aircraft and ADS-B ground stations by future satellite platforms. At left we can see the polyestirene gondola that contained the systems. CNS Aviation provided the Transportable ADS-B Multi Link Airborne Coverage Evaluator (TAMLACE) dual frequency ADS-B transceiver that was integrated with the balloon systems for the tests. The FAA-AST Commercial Space Office sponsored CNS Aviation to modify the TAMLACE system to incorporate very high altitude GPS capabilities and an internal data recorder for all uplink and downlink ADS-B related messages on both 1090ES and 978UAT systems.

The balloon was launched on 5 December 2013 from NSC's Johnson Near Space Center (JNSC) in Tillamook, OR. The balloon reached an altitude of 95,000 feet (29km) and remained at that altitude for 1.3 hours. The goal of this first test flight was to capture ADS-B broadcasts in real-time from both commercial and general aviation aircraft equipped with ADS-B transponders on both frequencies from well above the target aircraft, effectively simulating ADS-B reception from satellites. Overall results were very encouraging and showed that communications between the balloon-borne TAMLACE ADS-B package and the FAA network of Surveillance and Broadcast Service (SBS) ground stations was very good on both links. The test flight also marked the first time a 1090ES ADS-B signal from a high altitude platform had been received and processed "on the glass" at an FAA Air Route Traffic Control Center, "Seattle Center" in this case.