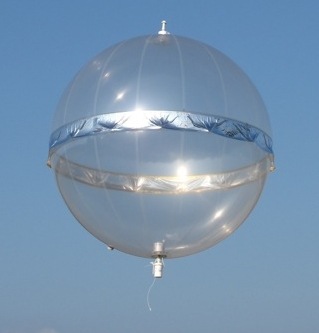 Scientific instrumentation onboard includes pressure, humidity and temperature sensors and a 3D GPS from witch the balloon velocity can be deduced. This gondola is located in the top of the balloon. Helium pressure and temperature are also monitored. Meteorological data are recorded on board every 10 seconds then averaged on a time interval between 10 seconds and a few minutes. Aditional instrumentation carried by the balloons for this campaign were an ozone sensor, a flow meter and aerosol counter. This system is denominated LOAC. Data are transmitted periodically (at flight level every 20 minutes) by means of the Iridium communication system located in the control gondola attached to the lower pole of the balloon. The balloon flight can be stopped either automatically if the balloon approaches a specific zone or by a remote command. Both gondolas are connected each other by a radio link to avoid wiring the balloon envelope.

This balloon flight was part of a campaign denominated ChArMEx (Chemistry-Aerosol Mediterranean Experiment), aimed to perform a scientific assessment of the present and future state of the atmospheric environment and of its impacts in the Mediterranean basin. During this first part of the campaign that endured between June and July, 2013 were launched 14 balloons from Port Mahon, Baleares Islands.