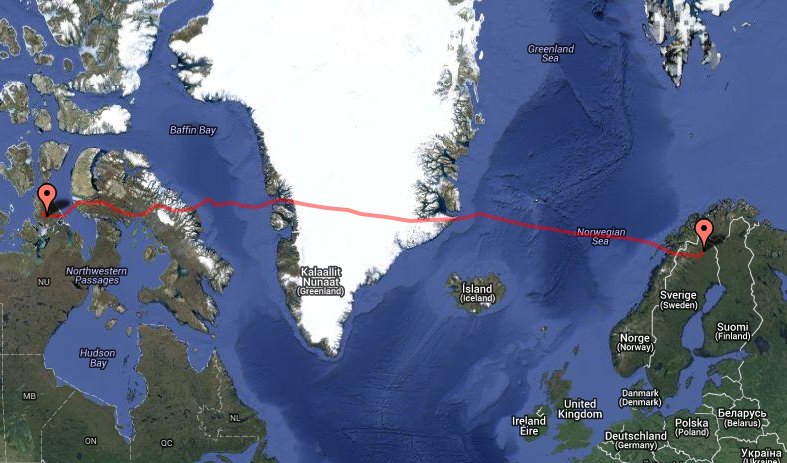 After a first frustrated attempt six days before, the stratospheric balloon was launched by dynamic method with assistance of the "HERCULES" launch vehicle, at 5:40 utc on June 12. After a nominal ascent phase, it was carried out by the westward prevailing winds of the summer and crossed over Sweden and Norway that same day. During this first part of the trip a new world record in wireless network connection was achieved as the ethernet based equipment of the Swedish Space Corporation was able to connect with the payload in flight at an speed of 1.8 megabits per second from a distance of 510.89 Km of the base.

Five days after launched on June 17, SUNRISE finally cleared the Canadian shore just over Baffin Island and after a few hours was separated from the balloon exactly at 11:52 utc. The payload landed 40 minutes later in the central part of the Boothia Peninsula in Nunavut.

Mounted in the external frame of the gondola of the SUNRISE telescope, was an experiment named IRIS (Image Recording Instrument for Sunrise) carried out by a spanish group of enthusiasts of science called Asociacion AstroInnova with the sponsorship of Citroen. The experiment was aimed to portray the launch and landing of the telescope with three high-definition cameras in addition to taking photographs and timelapse images throughout the entire Transatlantic flight.

One month after the flight, the IRIS team presented to the world the images obtained in the flight, including a time lapse of the entire journey. After a first glance at the images (which below can be seen directly from AstroInnova's youtube channel) we must admit that these are without doubt one of the most beautiful views of the arctic region ever obtained.