BEENS (Balloon Experiment on the Electrodynamics of Near Space) 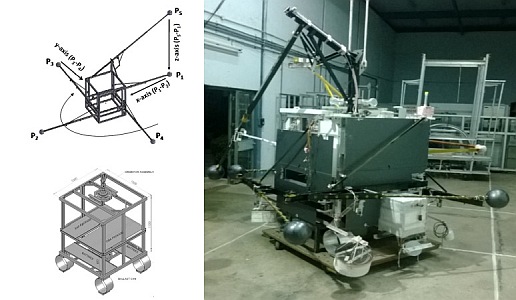 The Balloon Experiment on the Electrodynamics of Near Space (BEENS) was a mission of exploratory type with the primary objective of capturing electric field signals at stratospheric altitudes employing the double-probe technique.

At left we can see an scheme of the BEENS payload. It comprised two orthogonal pairs of spherical probes, namely P1-P2 (referred to as x probes) and P3-P4 (referred to as y probes), with the line joining the probes P1 and P2 defining the payload x axis and the line joining the probes P3 and P4 defining the payload y axis. A reference magnetometer was mounted on the top deck of the central body in such a manner that its two horizontal sensors were aligned along the two horizontal payload axes defined above. The probes deployed in the horizontal plane were configured to yield measures of the north-south and east-west components of the horizontal electric field. A fifth probe (P5) was mounted at the end of another boom that was deployed at an angle of 45º to the horizontal plane. In this manner, this probe, along with one of the probes deployed in the payload x axis, namely P1, was configured to yield a measure of the vertical electric field.

All five probes were identical 20 cm diameter aluminum spheres coated with Aquadag, a conducting carbon paint used to minimize the work function differences between them. Each of the four booms to where the horizontal x and y probes were mounted was 3 m long, with its outermost 1 m made of insulating fiberglass rods and was kept in stowed condition prior to the launch. The gondola dimensions were of 1 meter each on all sides. The probe-to-probe baselines achieved for the x and y probes were 6.92 and 7.02 m, respectively. The probe-to-probe baseline achieved in the vertical direction was 2.82 m.

A DC torque motor, referred to hereafter as orientator, enabled the rotation (clockwise) of the gondola about the vertical axis for meaningful horizontal electric field measurements. A universal coupler immediately following the orientator provided additional stability for the platform by ensuring that the axis of rotation did not get tilted as the balloon maneuvred through and around the ambient medium during its flight. The three-axis fluxgate magnetometer (FGM) serving as a reference magnetometer or magnetic compass for the electric field measurements as mentioned earlier and a two-axis search coil magnetometer (SCM) for monitoring fluctuating magnetic fields in the ELF-VLF frequency range completed the instrument package. The search coil sensors were mounted at the end of a rigid 1.5 m long boom. The four sides (of about 1 m2 area) of the gondola were mostly covered by aluminum panels with Teflon spacers, which electrically isolated the panels from the gondola. These aluminum panels were also coated with Aquadag. With their large conductive area, the panels provided a common ground.

A load line of about 75 m was used to connect the balloon with the payload. The main packages along the load line were a cut-off device situated just below the balloon, a parachute, a GPS radiosonde and a radar reflector. The support packages for the BEENS experiment were the telemetry unit, a telecommand unit, a ballast container, a battery pack and other housekeeping devices. 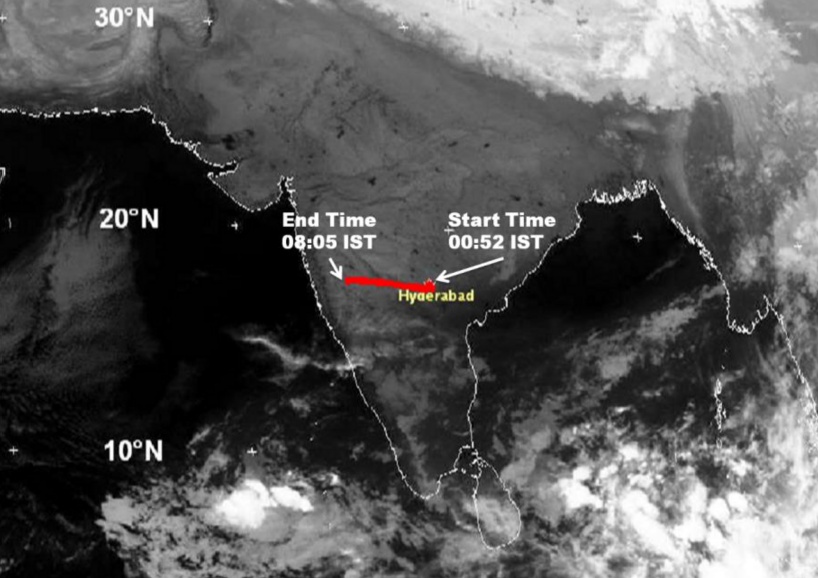 The balloon was launched from the TIFR National Balloon Facility in Hyderabad, India at 00:50 Indian Standard Time (IST), on 14 December 2013 (19:20 utc on Dec.13). Immediately after the release of the balloon, a command was given and all five booms were successfully deployed one after another. Another command given 16 min after the launch activated the orientor and the payload started rotating as evidenced in the reference magnetometer data telemetered to the ground.

When the balloon reached the float altitude of about 35 km, the stratospheric winds in the region were blowing towards west. With the safe flight corridor for the recovery of the payload being about 400 km on the west, the flight had to be terminated at around 8:00 IST (2:30 utc on Dec. 14) after achieving a total flight time of 7 hours and a float duration of slightly more than 4 hours.

The payload landed in a sorghum field near Pandharpur, in Maharashtra state, India and was recovered that same afternoon.