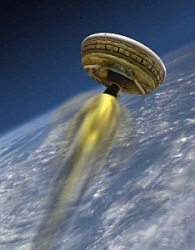 The test consisted in the launch of a mockup of the real LDSD gondola. After the succesful launch and release of the model from the tower, the balloon was let to ascend to 8000 feet and then terminated, landing a few miles NW of the city.