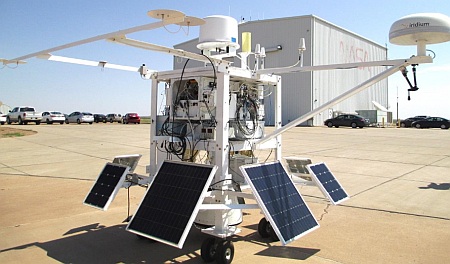 The mission was a technological flight aimed to test several systems to be incorporated in the near future in the Long Duration Balloon (LDB) flights performed by the NASA balloon program from places like Sweden (transatlantic flights to Canada) and Antarctica (circumpolar flights), using superpressure balloons or conventional (zero pressure) ones.

The payload consisted in a special square gondola developed by CSBF to be used for these kind of technological missions. Several antennas for Iridium and line of sight links were part of the gondola as well several configurations of solar panels.

Also was onboard a "piggy back" experiment flown as a "payload of opportunity" consisting in a capsule denominated MARAIA which was droped from the balloon during the flight. The capsule is part of a Johnson Space Center/Kennedy Space Center prototype being developed for International Space Station sample return.

The objectives of the drop test were to characterize the capsule's transonic and subsonic free-fall dynamic behavior and aerodynamics, execute a full-scale autonomous pneumatic parachute deployment and recovery system, execute drogue-to-main parachute transition, recover the payload and capture video and sensor data. The capsule was dropped from an altitude of more than 102,000 feet. All test requirements were met with the exception of video and imagery due to a problem with the camera's memory. The recorded data from Maraia's drop test has provided Johnson Space Center engineers vital information about the behaviors of various aeroshell shapes during reentry.

The balloon was launched by dynamic method from the Fort Sumner Municipal Airport in New Mexico on August 19, 2013 at 14:40 utc. After a nominal ascent phase the balloon reached float altitude of 103.000 ft and acquired a flight path in a straight line toward west. After a flight of 8 hours and 40 minutes the mission was terminated over Arizona. The payload landed 15 miles SE from Saint Johns. Both, balloon and gondola were recovered succesfully the next day.