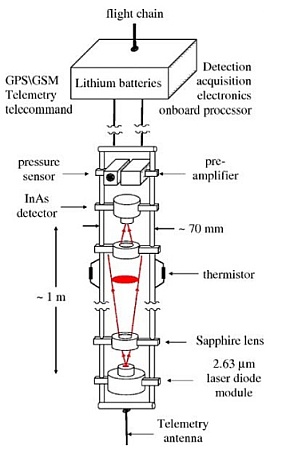 Also in this flight was included LOAC (Light Optical Aerosols Counter) an optical particle/sizer counter developed by Laboratoire de Physique et Chimie de l'Environnement et de l'Espace (LPCE-CNRS) from France. The system is light and compact enough to perform measurements not only at the surface but under all kinds of balloons in the troposphere and in the stratosphere. It performs observations at two scattering angles. The first one is around 12°, and is almost insensitive to the nature of the particles; the second one is around 60° and is strongly sensitive to the refractive index of the particles. By combining measurement at the two angles, it is possible to retrieve accurately the size distribution and to estimate the nature of the dominant particles (droplets, carbonaceous, salts and mineral particles) in several size classes. This speciation is based on calibration charts obtained in the laboratory.

LOAC is a modular instrument, for which some parts can be changed depending on the measurements conditions. For measurements under balloon or on the ground in low wind conditions, the aerosols are collected by a metal profiled inlet designed to optimize the sampling conditions when oriented in the wind direction. The particles are drawn up to the optical chamber through an isostatic tube by a small pump. The pump is connected to the exit of the optical chamber by a flexible plastic tube. For measurements in windy and rainy conditions, the inlet can be replaced by a total suspended particulate or TSP inlet rejecting rain droplets and particles greater than 100 µm. For long-duration measurements, the small pump can be replaced by a robust pump. The sampled air crosses a laser beam of 25 mW working at the wavelength 650 nm. The scattered light is recorded by two photodiodes at scattering angles of respectively 12º and 60º. Instead of using lenses to collect the light, the photons travel directly to the photodiodes through pipes, providing fields of view with a few degrees. The collecting area of the photodiodes is larger than the diameter of the pipes. This system prevents optical misalignment problems in case of vibrations and strong temperature variations like those encountered during atmospheric balloon flights.

To minimize its weight, the optical chamber is encased in plastic Delrin. The weight, including the pump, is of 350 grams.