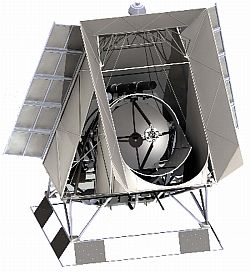 Is a stratospheric telescope conceived to map the magnetic field structure of many different star-forming regions, for addressing what role these fields play in the star formation process.

With the addition of a polarimeter, the original BLAST telescope is now capable of probing linearly polarized Galactic dust emission, hence her new name BLAST-Pol. Originally designed to conduct wide-area extragalactic and Galactic surveys at submillimeter wavelengths BLAST had two long duration balloon flights one from Sweden to Canada in 2005 and another in Antarctica in 2006. On this last flight, after termination the parachute could not be detached, which resulted in the payload being dragged 200 km over the ground in 24 hours. BLAST hardware was totally destroyed, with the exception of the mirrors, detectors, receiver and the pressure vessel with the experiment data which were recovered.

Three stepper motor actuators change the position of the secondary mirror with respect to the primary mainly to compensate changes to the radii of curvature of the optical surfaces due to diurnal temperature variations during flight. These actuators are also used to set the original tip/tilt alignment of the secondary.

The cryostat houses most of the receiver system. It is constructed of aluminum and G10 woven fiberglass reinforced resin epoxy and is maintained at vacuum to prevent thermal convection. Each thermal stage is light-tight except the optical path, which is thermally protected with infrared blocking filters. Liquid baths of nitrogen and helium maintain the temperatures of the 77K and 4.2 K stages. In flight, an absolute pressure regulator is used to maintain approximately 1 atm
above each bath. A vapor cooled shield is located between the nitrogen and helium stages which is cooled by boil-off gas from the helium bath and reduces the thermal loading on the helium stage. The cryostat holds 43 liters of nitrogen and 32 liters of helium and has an 11.5 day hold time.

For BLAST-Pol an Achromatic Half Wave Plate has been incorporated into the optical design and mounted inside the optics box near the Cassegrain focus of the telescope. The use of this kind of rotating piece acting as a polarization modulator is a widespread technique in observations at millimeter and submillimeter wavelengths. However, it is operated in a stepped mode, rather than a continuously rotating mode. The rotator employs a pair of thin-section steel ball bearings housed in a stainless steel structure, and is driven via a gear train and a shaft leading to a stepper motor outside the cryostat.

The inner frame is made from thin-wall aluminum box beam. It supports the telescope, cryostat,detector read-out electronics, gyroscopes and star cameras. It is attached to the outer frame at two points, defining an axis of rotation controlled by a motor mounted on one side of the inner frame at the attachment point to the outer frame. A free bearing provides the connection point on the other side.

The back, sides and bottom of the gondola are surrounded by Sun shields, allowing the telescope to point as low as 25 degrees in elevation in order to observe targets close to the Galactic Center. 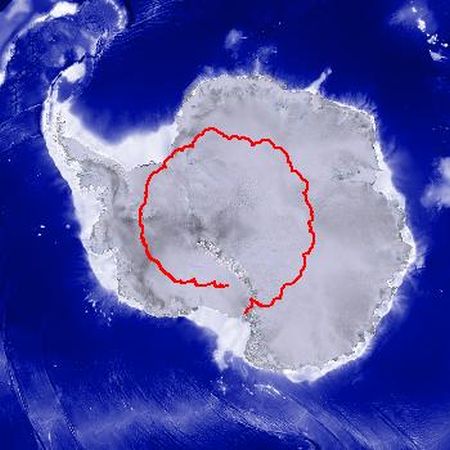