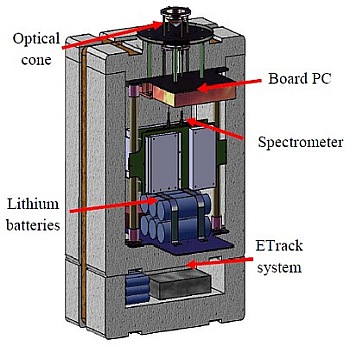 SAOZ (Système d'Analyse par Observations Zénithales) is an UV-visible spectrometer developed originally by the Service d'Aéronomie in the early 90's and flown since then more than 125 times on short duration balloons as well as 15 times on long duration Infra-Red Montgolfier around the world for studying stratospheric ozone, NO2, OClO, BrO, H2O and aerosols at all latitudes.

The mini-SAOZ (image at left) is a smaller/lighter (less than 12 kg) version of SAOZ, developed in 2009 based on more advanced technology, allowing more flexible and relatively cheap flights on small balloons. The measurements are performed during the ascent of the balloon and by solar occultation from float altitude around 30 km at sunset or sunrise. The instrument is composed by a small 716 grams Czerny-Turner spectrometer of 75 mm focal length and 0.8 nm spectral resolution in the 300-800 nm range. The sensor is 2048 x 14 pixels CCD detector linked by an optical fiber to an optical head of 5°/+45° elevation and 360° azimuth field of view on the top of the payload.

The species retrieval procedure makes uses of the DOAS (Differential Optical Absorption Spectroscopy) applied to the ratio between each spectrum and reference spectrum measured immediately after reaching float altitude around 30 km at the smallest possible sun zenith angle for minimizing the residual absorption along the line of sight. After wavelength alignment on Fraunhofer solar lines, slant column amount of each species are derived by least squares correlation with laboratory absorption cross-sections in an iterative process from which vertical profiles of the various species are retrieved by an onion peeling inversion scheme.