The CALET (CALorimetric Electron Telescope) mission aims to reveal high energy phenomena in the universe through a detector intended to be placed on the Japanese Experiment Module of the International Space Station. In that context several balloon-borne prototypes denominated bCALET will be used to test the concept, obtaining at the same time useful scientific data. Althought the size and complexity of the experiment will change from one mission to another, their basic structure remains unaltered.

In the scheme at left can be seen the distribution of the elements that composed the bCALET-2 instrument which is a 1/12 scaled down version of the full sized experiment for the ISS (click to enlarge).

The upper part is an imaging calorimeter (IMC), composed of eight layers for shower imaging. Each layer consists of a tungsten plate and two scintillating fiber belts arranged in the x and y direction and composed of 256 scintillating fibers of 1 mm2 of diameter each. The dimension of the IMC is about 256 mm x 256 mm while the total thickness of the tungsten plates equals to 3.57 radiation length (RL). The image measured by the IMC is used for estimation of the incident direction and shower development of cosmic rays. Signals of each fiber are detected by 64 multi-anode Photomultipliers (PMTs) and then read out by eight front-end circuit modules reading each up to eight of the PMTs.

In the lower part of the instrument is located the total absorption calorimeter (TASC) composed of 6 scintillator layers, each composed of ten Bismuth germanate (BGO) logs measuring 25 mm2 of cross section. Alternate layers are orientated 90 degrees to each other to provide x and y coordinates. The total thickness of the TASC is 13.4 RL and it's main function is to measure the shower development to determine the total energy of the incident particles and to discriminate electrons and gamma rays from protons. The BGO signals are measured by a single photodiode attached to each log and digitized by pulse height analyzer modules.

A Silicon Detector Array (SIA) used to measure the charge number of incoming particles is located directly over the IMC. There inside a metal box lies a layer of four pixelated silicon charge sensors with a sensitive area of 9cm x 9cm and two x-y layers of position sensitive silicon strip detectors.

Two layers of 20mm-thick plastic scintillators (S1, S2) and the top layer of the TASC (B) are used as trigger system working in two modes: one to obtain only showering events and the other to record gamma-ray events. S1 acts also as a veto counter being adjusted to eliminate effectively the background proton events.

All these elements are contained in a pressurized vessel and mounted in a protecting gondola. 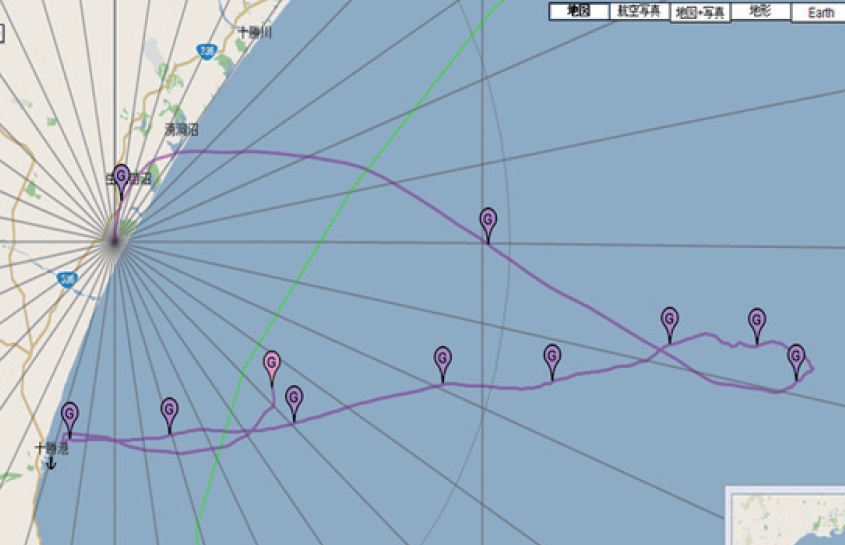 The launch of the 100.000 m3 balloon occured using the semi-dynamic method at 6:21 local time and by the time it reached the ceiling altitude of 33.9 km, it had drifted 75 km east from the launch site.

Then, in the leveled portion of the flight the craft developed first a westward path and then a southwest one until 11:00 local time when the payload was seperated from the balloon.

While the payload splashed down in the Ocean in a point located 25 km East of the shore, the deflated balloon descended slowly than anticipated and drifting eastward finally landed on a mountain range near Hiroo in Hokkaido.

Althought no damage was reported, the operations were halted until an investigation concluded that all the security systems operated well and the unexpected landing was not due to onboard systems malfunction so in September 4, the agency resumed the campaign.