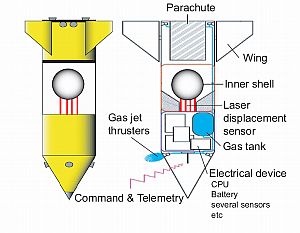 Microgravity can be achieved by different means: drop towers, parabolic flights, or Space based platforms like satellites or the International Space Station. On one hand the first two systems are low cost but have a short duration, on the other hand space based systems have longer durations but huge costs.

A half way option is the use of aerodinamically designed vehicles that droped in free-fall from a balloon flying in the stratosphere can offer between 30 and 60 seconds of good quality microgravity environment for scientific purposes.

On this regard ISAS (Institute of Space and Astronautical Science, presently a part of JAXA) had developed balloon-dropped experiment systems since 1978 achieving 10 seconds of microgravity in 1983. The main setback for that project was the limitations on the balloon technology of those years.

However Japanese scientists returned to this concept and developed since 2004 the Balloon-based Operation Vehicle (BOV). It consists of two main parts: a flight capsule body rocket-like shaped (outer shell) and an experiment module that floats free in the interior of the capsule (inner shell). The system is carried to the stratosphere by a new kind of balloon capable of reaching 40 kms of altitude, thus assuring 30 seconds of good quality microgravity. To allow this, the inner shell must be isolated from the outer shell so no disturbance forces work on it during the free-fall. At left can be seen a detailed scheme (click to enlarge). BOV measures four meters of length, 0.55 mts of diameter and weights 310 kgs. As can be seen in the image it have a rocket-like shape to reduce aerodynamic disturbance.

The inner shell can fall freely since the outer shell measures it's relative position with laser displacement sensors activating several gas-jet thrusters to avoid any colition with it and let him free from the dynamic pressure and other aerodynamic disturbances. As Air drag is almost proportional to the square of the velocity and also proportional to the air density, to achieve 30 seconds of microgravity duration, 100 Newtons of thrust are required. Therefore, the body have 16 cold gas jet thrusters, four of them located in the front and the remaining twelve in the rear.

This system is all managed by a Central Procees Unit running at 200MHz, Linux based and powered by lithium-ion batteries (12V and 24V). This CPU stores house-keeping data as temperature, acceleration, tank pressure and so on and also transmits it to the ground via a telemetry link. Four video cameras are located in different BOV parts to obtain images of the experiment and location of the inner shell as well a downward external view.

In the middle of BOV's body, there are four laser displacement sensors to measure clearance between the inner shell and the outer shell. This system estimates the center position of the inner shell by the Newton-Raphson method and proceeds to fire the thrusters to correct the outer shell location to maintain it isolated from the inner shell. Attitude control is also necessary to maintain stable micro gravity experiments, so there are three fiber optical gyros to measure the body attitude ans send to the thrusters the correction firings. To realize these corrections each of the 16 thrusters are commanded to be fired as required using a distribution matrix calculated from the relation between each thruster's force and the total force and torque output that actuates on BOV's body.

Inside the inner shell there are space to allocate the microgravity experiment payload. Since the experimental module is isolated from the data handling and communication components located on the outer shell, telemetry data such as video image or accelerometer output is transmited internally through a wireless system which also is used to transmit commands to the experimental module. To reduce the power consumption all these commands are transmited by infrared communication.

Plans of future development of the system include the addition of an air-breathing engine called "S-Engine" which currently is being developed by JAXA. This higher thrust propulsion system is essential to compensate rapidly increasing air-drag. This will allow to achieve up to 60 seconds of microgravity in the future. 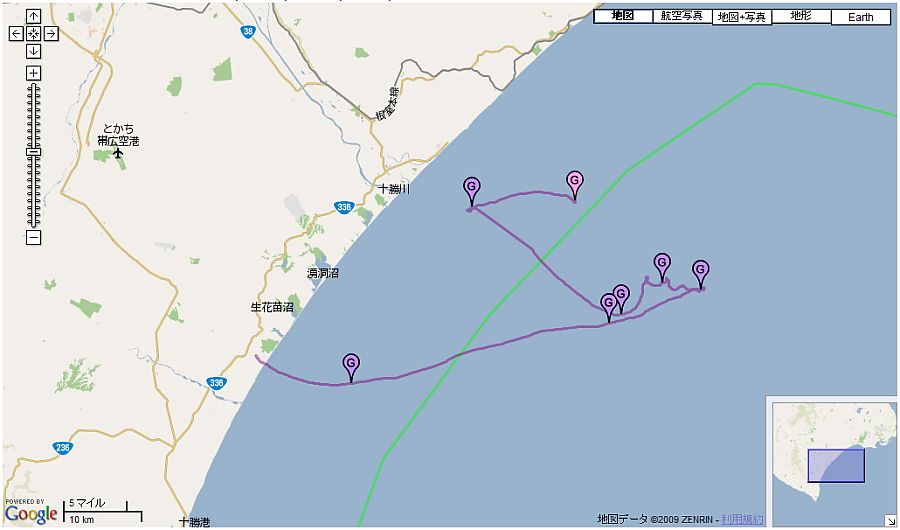 The balloon was launched by semi-dynamic method with assistance of the sliding platform system on May 27 at 6:04 local time ascending at a mean speed of 330 meters/minute until reach the float altitude of 40 km while flying over the sea 40 km off the shoreline.

At 8:55 local time a command was sent and the payload was released from the gondola. After free-falling for near a minute, the three-stage supersonic parachute system deployed to allow a soft splashdown in the ocean 30 km from the coast in front of the Tokachi subprefecture. The capsule was recovered from the water by an helicopter at 11:10 jst and was immediatelly returned to the TARF. This was the first helicopter recovery performed at the new base.

After the release of the capsule, the control gondola was separated from the balloon and both were also successfully recovered on the sea using three boats and one ship.

The three bodies which descended separately (the capsule, the control gondola, and the collapsed balloon) were each tracked by three telemetry antennas set at the TARF: two located on rooftop of the balloon operation building, and the stand-alone mobile station LASCOS (Low Altitude Space Communication System) set besides the balloon operation building.

Althought it was nomenclated as BOV-4 this was the third flight of the microgravity experiment. Basically was the same configuration of the second flight though its operation was improved and simplified.

BOV-4 performed very well with good quality and same duration of microgravity. Unfortunately, the payload carried in the inner shell (a fluid dynamics observation experiment) did not worked.

After the experiment was over, the pilot-parachute was opened for speed reduction and when BOV achieved a height of 7.5 km the main parachute was released.